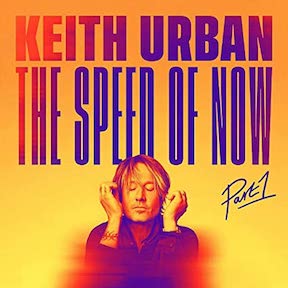 It's getting tougher and tougher all the time to justify categorizing Keith Urban's music as country. "The Speed of Now, Pt. 1" doesn't help. (What, is there a pt. 2 of this largely lame music on the way? Say it ain't so!) It's a relatively good pop album, for a Nashville pop effort, but there's just too much real country (Jon Pardi, Luke Combs) getting played on mainstream radio these days. The world just doesn't really need new Urban pop music.

Listeners need to trudge through a lot of mindless music to get to a quality song like "God Whispered Your Name." Yes, it's yet one more love song that applies church language to give it that gospel-y feel. However, it's one of the better examples of this overused tactic.

Urban also includes a social justice song with "Say Something," which doesn't really say much. "Polaroid" is a fingers-snap track (another too oft-repeated sonic approach), which isn't too bad. "Better Than I Am" is a big ballad that works. It's a fine arrangement, and Urban sings it extremely well. Some have already complained about "Soul Food," but it's actually a pretty good pop song. Maybe it's just the mere mention of comfort food makes one hungry enough to give it some grace.

With all that said, most of us don't put on country recordings to hear good pop songs. Why do that, when there is plenty of great pop music out there, both new and old? There's also more than enough great real country, as well, and Urban's "The Speed of Now, Pt. 1" wears out its welcome fast.