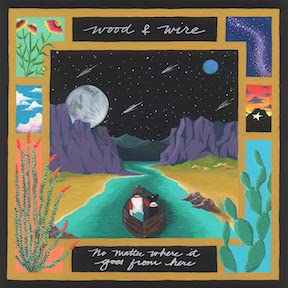 The fourth full-length studio release from the Austin-based quartet Wood & Wire is anchored in bluegrass with elements of folk and rock. The band members wrote or co-wrote seven of the nine tracks with an appealing mix of social commentary and nostalgia. The most potent composition is "Pigs" written by guitarist Tony Kamel with Nashville-based singer/songwriter Silas Lowe, which takes a poke at religious TV charlatans ("False prophet on the TV screen/Says the lord almighty speaks right through me") and laments the divisiveness stoked by the media ("You hate me and I hate you/A bunch of pigs on the tube want to make that true").

Kamel also contributes the sentimental "John" in which he looks back fondly on a childhood friendship and admires the unconventional choices his friend has made ("He's a modern day Kerouac, and wannabe Banksy/Silent, unsettled, a victim of time"). Similarly Billy Bright (mandolin) reflects on his youth in El Paso by noting both its geographical virtues ("My hometown is long and lean/Sixty miles from east to west") and societal limitations ("You watch your step, you seek, you find/You don't ever speak your mind").

One of the stronger tracks is a cover of Geoff Union's "Spirit of '94" about the Whiskey Rebellion with an unflattering take on the founding father ("Hamilton decreed it, and Washington he signed/Them folks back east don't give a damn about the frontier life"). A pair of slick instrumentals give the band an opportunity to display their musicianship including "Roadie's Circle" written by Trevor Smith (banjo) as a tribute to his departed collie kicked off by a Peter Rowan yodel featuring solos from Smith, Bright, Kamel and bassist Dom Fisher, and Bright's salute to Vassar Clements "Clamp's Chute."

With stellar musicianship, strong compositions and tasteful production by the band along with Pat Manske, "No Matter Where It Goes From Here" is a fun and compelling listen.

CDs by Wood and Wire