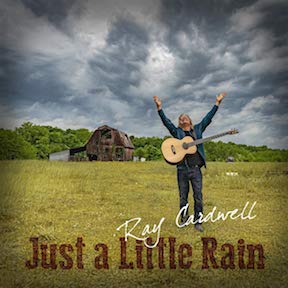 After being coaxed back into bluegrass following several years mining other musical stylings from pop to reggae by flatpicking, former New Grass Revival member and producer Pat Flynn, Ray Cardwell is back. His new single, "Rising Sun, " is a upbeat gem with modern stylings.

Cardwell has lots of noticeable influences throughout, not the least of which is a welcome strong vocal feel and musicianship that evokes the best of John Cowan and New Grass Revival in its prime. Produced by Danny Roberts of The Grascals, who does double-duty playing mandolin throughout, the album is a tour-de-force mixing tunes like the slower title cut with hard driving bluegrass such as the aforementioned "Rising Sun" and "Standing on the Rock." Welcome surprises are found in the cover of Al Green's "Take Me to the River" done bluegrass style and in the solid and beautiful background vocals provided throughout by the 19-year-old Jaelee Roberts, daughter of producer Danny.

The record closes strong with Cardwell's self-penned ode to the road "Born to Do" and the classic sounding closing cut, "Constant State of Grace, " co-written by Darrell Scott, longtime bluegrass and Americana sideman. After years of mining other musical landscapes, Ray Cardwell has done himself proud on this outing, coming back to his Ozark roots.