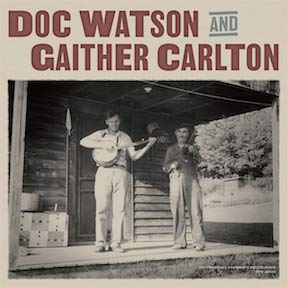 The story of Arthel "Doc" Watson should, by now, be familiar to anyone with a serious interest in American folk and country music, but here's a brief recap: blinded in infancy, Doc grew up in a musical family learning to play guitar, banjo and harmonica, absorbing a repertoire that included both the ancient, traditional songs of the Appalachian culture he spent his entire life in and the popular country hits of the 1920s and 1930s he heard on radio and on the family gramophone. The widespread legend is that he was "discovered" by folklorist and musician Ralph Rinzler (though Rinzler himself would probably have pointed out that Doc was pretty well known in his western North Carolina homeland), and with Rinzler's help (including acting as manager) was introduced to the world at large at the height of the "Folk Boom" of the late 1950s and early 1960s (or, as some called it, the "Folk Scare").

Doc was a gifted, natural performer blessed with the ability to make an audience of any size feel like they were simply sitting with him in his living room. What really caught people's attention, though, was his astonishing ability to play complicated fiddle melodies on the guitar with a flatpick. In a country and folk music environment where the "gold standards" were Maybelle Carter's thumbpick-and-strum and Merle Travis' distinctive brand of fingerpicking, Doc Watson was a revelation who spawned generations of flatpickers that today include wizards like Bryan Sutton and Billy Strings.

New York City was the epicenter of the folk music scene in the early 1960s, and Rinzler worked hard and fast to get Doc into the mix, booking him into a pair of venues in October, 1962 with the Friends of Old Time Music (in a show at NYU) and a smaller club in the West Village called Blind Lemon's. At both shows was a teenage student and folk music enthusiast named Peter Siegel, who would go on to a career as a record executive and producer. He received permission from the promoters to record both shows for archival purposes as Doc performed with his father-in-law, Gaither Carlton, a fiddler likewise renowned in the North Carolina Blue Ridge. Six decades later, Siegel has lovingly restored the tapes he made those evenings to share a glimpse of how Doc and his various family members (in particular his son, Merle, who joined him a few years after these shows) became such audience favorites in the decades to come.

All 15 tunes in this collection (including two versions of "Groundhog") became standards in Watson's repertoire, recorded multiple times over the decades in studio and live settings, but what sets these apart is the fact that, for the most part, Doc is concentrating on backing up Gaither's fiddling, and there's not much of the fancy picking that made him world-famous. Although, for those who pay attention to such things, Doc's bass runs were a source of amazement as well. And, it should be mentioned, he sings and plays banjo on several cuts.

The context in all this, though, is that while Doc's career in the spotlight would go on for another half-century, he was no kid at the time, he was only a few months short of his 40th birthday. These shows capture the energy and craftsmanship of two folk musicians who had known and played with each other for many years, and Gaither Carlton is no afterthought. He's a full partner in what transpired those evenings so long ago. Siegel has done us all a huge favor in capturing and preserving these timeless performances.