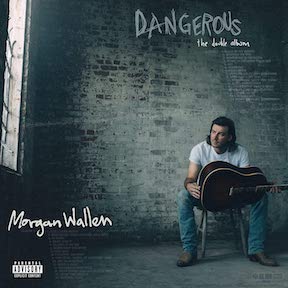 The buzz in the industry is that Morgan Wallen is primed to be the next big country music superstar. If prognosticators are correct with this prediction, the man fully deserves all the recognition. Proof positive is his "Dangerous: The Double Album," which is a humongous 30 songs long! It's a two-CD set. Not like a double album from back in the LP era, but a double full-length CD effort. Therefore, if you want to take a deep dive with this one, make sure you have plenty of air in your scuba tank. It's a commitment, but also well worth all the time. While a lengthy project, this work is all quality music, no filler.

Many alt.-country fans first became aware of the Wallen because he covered Jason Isbell's "Cover Me Up." Opinions were divided among the hipper crowd. On one hand, some thought Isbell deserved more exposure for one of his best songs. Then there were those that were simply happy Isbell was getting more recognition among mainstream country fans. With that said, Wallen's version here is one beautiful recording. Wallen is a powerhouse vocalist and this track features some extremely fine steel guitar playing. Then there's "Only Thing That's Gone," a duet also featuring Chris Stapleton. This vocal pairing is like the musical equivalent to a heavyweight championship fight. Stapleton is, perhaps, today's most soulful country singer, yet Wallen definitely holds his own. If you love stellar singing, you may want to skip right to this one.

Wallen has surrounded himself plenty of fine instrumentalists. Wallen didn't write everything here and doesn't take sole credit for writing any one song. However, guys like HARDY, Josh Thompson and Eric Church all helped to create these songs, which is why everything is good, if not great. In fact, "Quittin' Time," with its beautiful acoustic arrangement, is Church's contribution. The album also includes plenty of sonic variety. The slightly western swingy "Need a Boat" bumps along nicely then, in contrast, "Somebody's Problem" allows Wallen to express his vulnerable, sensitive side.

Calling the album "Dangerous," considering backlash Wallen received for videos showing the singer maskless, violating social distancing recommendations and kissing college-age women (which forced him to postpone a high-profile Saturday Night Live appearance in October 2020) now seems an unfortunate naming choice. Nobody wants to be thought of as one that dangerously spreads a virus during a pandemic. Hopefully, Wallen has put this incident behind him by now. The artist is dangerous, as in dangerously good, and his new music extensively evidences that fact. So, block off a big chunk of time and enjoy.