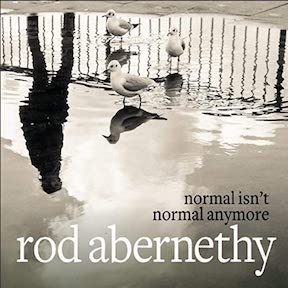 Sometimes a listener can be humbled to confess little to no knowledge of the artist. So, the first step is to go to the credits. In the case of singer-songwriter/educator/master guitarist Rod Abernethy, we notice Neilson Hubbard (Mary Gauthier, Kim Richey, Wild Ponies) is the producer/drummer and Will Kimbrough is on additional guitars. That's more than enough to establish credibility. Abernethy is such a gifted writer and talented guitarist that one wonders why he has not achieved more notice. Music veteran Abernethy - he was in the North Carolina band Arrogance with Don Dixon in the '70s - was the 2019 winner of the American Songwriter's Bob Dylan Song Contest. His 2018 release, "The Man I'm Supposed to Be," his first solo disc in four decades, received critical acclaim. Abernethy has also garnered awards composing for film, TV, and video games.

His are mostly warm, story-driven, folk songs beginning with the animated "Just Around the Corner" and "It's Always Something." When he settles into the more contemplative "My Father Was a Quiet Man" Abernethy reveals the poignant depths of his emotional writing, oozing tons of empathy and respect. "Birds In The Chimney" is a real depiction of when Abernethy discovered a bird nest above his fireplace. It seems only natural that the North Carolina-based artist would pen a tune about the state's cash crop, collaborating with Cattaneo on "Tobacco Was King," reminding us about the '50s when just about every adult was smoking a cig.

The title track takes on the polarization of media and fake news while "Another Year" chronicles the lives of everyday people, the challenges they face, and the need for us to assist the lonely. His are not only well-crafted songs; they are important, provocative messages that need to be shared.