EP Never Will: Live From A Distance (Warner Nashville, 2021) 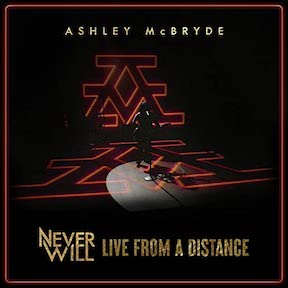 Ashley McBryde titled this six-song EP "Never Will: Live From a Distance," but just don't expect it to sound much like a typical live album. These songs were recorded live so fans could hear what they sound like live, it's true, but you won't hear any crowd cheering on it – just the music alone. With that said, though, it represents the cream of McBryde's quite productive crop.

A couple of these songs lean toward McBryde's gothic side. "Martha Divine" is all about a girl that aims to kill her father's lover, while "Voodoo Doll" is the sound of McBryde getting revenge on a Jolene. "Shut Up Sheila" is one about putting a fundamentalist Christian in her place. "First Thing I Reach For" is a darn fine country song about bad decisions, while "Sparrow" expresses McBryde's wonder for birds.

Of course, McBryde finally did make it out on the road and was able to feel the positive audience responses to these fine songs. If you missed her, though, this is a little bit what they sounded like.