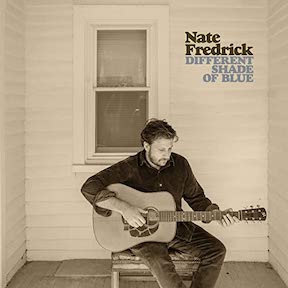 This is the debut for Nashville-based, Missouri born and raised Nate Fredrick. While he's relatively new to songwriting, his name is on all 11 tracks, nine of them with eight different co-writers. Yet the album sounds much more familiar, comfortable and in its own way, 'old' rather than new. There's clever, memorable lyrics like "I was trying to get over you but here I am all over you again," evoking the kind of lyrics we associate with the best country songs.

Apparently, while recovering from a tragic accident, Fredrick immersed himself in the songwriting process with a group of friends that resulted in over 100 songs. Some of this early inspiration appears in his nod to Kris Kristofferson and Guy Clark in "The Dreamer" which he begins like Kristofferson did on "Beat the Devil" – "there was only one thing left to do so I laid it on him" in a spoken manner. The song, like most is about relationships, those that materialize, those that are unattainable and those that dissolve.

The title track addresses that ever-common theme of why the desire for 'greener grass" usually doesn't quite work out. The sweeping pedal steel conjures those gorgeously scenes of rural Kentucky in "Paducah," as the narrator goes through that self-reflective process of trying to find himself, much like we have all experienced on our own road trips.

Another standout is "Forget Ever Loving Me," about unreturned love, but its backing of B3, classic guitar, and background vocals gives it a country-soul quality. And the closer "Patches," the best track, is not a cover of the famous Clarence Carter tune, but, instead, the concept of moving on told through three separate stories: an old pair of jeans, a hand-me-down-car and the end of a long relationship. Fredrick's songs are like your old well-worn shirt; there may be better ones in the closet, but that one is just so comfortable; you keep returning to it. You'll be doing the same with his songs.