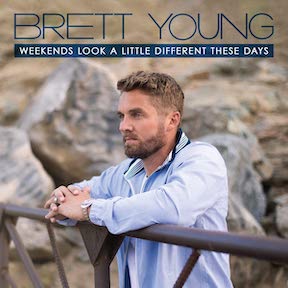 It's troubling after listening to an album multiple times in a row, to not have even one song stick in one's memory. However, this is an honest initial response to Brett Young's "Weekends Look A Little Different These Days." It's not so much that the music on Young's eight-song effort is bad; it's just so utterly unremarkable.

Appreciation of Young's music rises and falls with what you think about his singing style. He sounds a little like Gary LeVox, albeit without any of that vocalist's nuance and power. His style is pop, which some have described as "Caliville." The music fits into mainstream country's broad definition of its contemporary style. However, since it's not rap, dance or EDM, this makes it, by a very flexible process of elimination, what some call country. The best song is the one that also is most similar to real country, "You Got Away With It," which includes some real, country instrumentation (including harmonica) and is somewhat like one of those Lady A upbeat numbers. It's also worrisome when a country-ish song sounds out of place on a full-length album.

Lyrically, songs like this project's title track, delve into the subject of aging and maturing. Not that Young is having (nor veering anywhere near to) a midlife crisis, but with age (hopefully) comes wisdom, and good on Young for recognizing that truism. These songs are passable, but not at all noteworthy.

Young's music will sound right at home on mainstream country radio, which is hardly a hearty recommendation. "Weekends Look A Little Different These Days" is okay for background music. However, serious listeners would much prefer striking foreground music, instead. This "weekend" is far closer to a Sunday, after church nap.