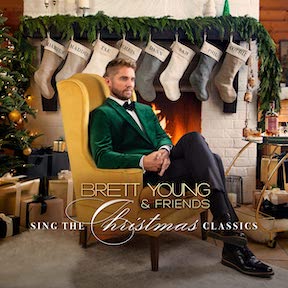 Brett Young's Christmas EP is a strange little thing. Like many holiday project creators, Young prefers to look backwards, rather than forward. Hence the phrase 'Christmas Classics' in the album title. Nostalgia is always huge in country music, so this approach makes some sense. Therefore, this release is one that may cause you to travel with Scrooge back to various Christmases from the past. You also might come away feeling decidedly Scrooge-y about it.

It's strange, however, because while Young sings with two contemporary Christian artists, one of these pairings (with Phil Wickham) is on the clearly secular "The Christmas Song." His duet with Chris Tomlin for "Silent Night," though, makes more sense. In fact, this is the only religiously-themed song on an eight-track project.

Young's cover of "The Chipmunk Song" is also a head-scratcher. Why do we need a serious version of a silly song originally sung by animated chipmunks? Dan Huff does add wonderful guitar work to it, however. Darius Rucker is wasted on "Rockin' Around The Christmas Tree," which includes jazzy, vocal scatting on it. Uh, the thought was they were singing about 'rocking' around that tree.

Unfortunately, most of the 'friends' (particularly the female ones) show more vocal character than Young. Young always sounds like he's putting on his singing voice, rather than singing from the heart. Oh, and these songs are not very country, either.

There are much better versions of all these songs out there ("The Chipmunk Song" not excluded), so if you really want to rock around the Christmas tree, find something else that actually rocks. Or as Brooks & Dunn once advised, play something country.