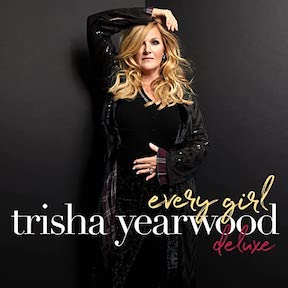 Trisha Yearwood's reissue of 2019's "Every Girl" as a deluxe edition with three new songs makes sense on some level. Logistically, having the title track lead off instead of the somber "Workin' on Whiskey" on the original version sets a more pleasant tone. Plus the listener gets a taste of the new material quickly. "I Dare You To Love" is up in the number two spot. It is textbook Trisha in her heyday. The soft piano intro brings Adele's "Hello" immediately to mind; she delivers a lilting, melancholy tale about choosing to love as the correct response to any situation when one feels wronged.

There are an unwieldy number of duets, and all four from the standard edition made the cut, the best of which is Kelly Clarkson's work on "Tell Me Something I Don't Know," a tale of knowing you're in love with someone that you're almost certain will end badly. Deft acoustic piano drives the first half, but the ladies get to use their big belt ranges on the latter portion of the song.

The cover of "Shallow" with hubby Garth Brooks is a nice slow burn here. Yearwood saves the high horsepower version for live shows. It still feels a bit gratuitous. This bonus number makes the duets comprise 30 percent of the album. Redemption is found in the 30th anniversary acoustic version of her first number one - "She's In Love With The Boy" and a perfect vocal synergy with Patty Loveless on "the cover of "Bible and a 44."

The collection is essentially a reshuffled track list of the standard edition. Yearwood is still in fine form vocally, but if you invest in this album, you would be best served as a fan of collaborations.