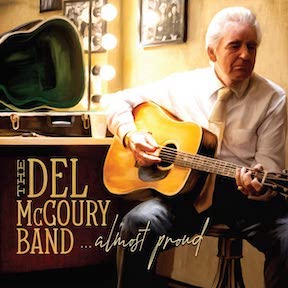 Since the mid-nineties, there has not been a more substantial bluegrass outfit than The Del McCoury Band. There has likely not been a more recognized set of musicians since the International Bluegrass Music Awards started to be handed out in 1990. McCoury himself was the organization's first Male Vocalist of the Year, an award he was now received five times; further, each current member of the group, from bassist Alan Bartrum and banjoist Rob McCoury (one each) to fiddler Jason Carter (five times) and mandolinist Ron McCoury (eight times) have won individual, instrumental honours.

Del McCoury is now 83 and undoubtably one of bluegrass music's senior and most revered practitioners. Last time out, with the award-winning "Del McCoury Still Sings Bluegrass," the song quality was uneven across the 14 tracks. With "Almost Proud," the songs appear more thoughtfully selected, meeting the standard previously established by bluegrass' senior statesmen and better suited to the octogenarian.

Two of the stronger songs were written by McCoury, "The Misery You've Earned" and "Running Wild," a song that prominently features Ronnie with Del and Carter. Ronnie takes the lead on Kris Kristofferson's "Love Don't Live Here Anymore."

The title track comes from the Gibson Brothers' enclave, co-written by Eric and Mike Barber. Del McCoury has recorded Mike O'Rielly songs in the past, and this time has chosen the late songwriter's "Honky Tonk Nights." This - perhaps the album's strongest performance - features Vince Gill's unmistakable voice. McCoury is at his best with narratives, and Matewan-era story of "Sid Hatfield" fits the bill herein.

As always, instrumentally the Del McCoury Band is untouchable. Seemingly effortlessly, the quintet has again crafted a challenging and fresh approach to what continues to sound like fairly traditional and thoroughly modern bluegrass.

An exciting album, "Almost Proud" again suggests that Del McCoury isn't slowing down as much as he is refining his considerable stature within contemporary, bluegrass music.