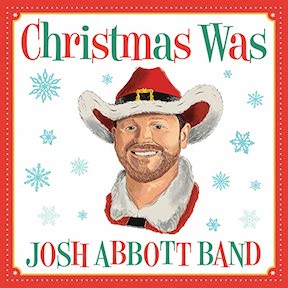 The Josh Abbott Band's five-song EP starts out slightly silly, but then gets really serious from the middle to the end. It also surprisingly covers a lot of subject matter ground in a short time span.

It opens with "Santa Better Knock," which leans a little to the Eartha Kitt, sexy side of Christmas songs. This one is followed by "A Marshmallow World," a holiday song with probably the least amount of artistic food value, which finds Abbott and band just having a little sugary fun singing it. That's the last of the lighthearted holiday greetings, however.

Next up is "Christmas Was," which is nostalgic in a sad way. On the one hand, Abbott sings this song's series of recollections with fond remembrance. However, when he sings about how that was how Christmas was, it's with the suggestion that the season has since lost much of its innocence and joy. It's significant, then, how Abbot doesn't sing about how Christmas is now. "The New Kid In Town" is a somber tune about the baby Jesus, and then the project closes with a reverent performance of "Silent Night."

Although Abbot wrote none of these five tracks, a few are relatively unfamiliar, which keeps it from being another trotting out of old holiday war horses. While not overtly country sounding, Abbott and his band's musical instincts are nevertheless of high quality throughout. Hopefully, these songs will help you make your Christmas this year, a little like it once was in years past.