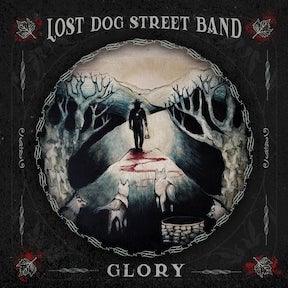 Seldom does a band name capture the sound of its musicians as well as does the Lost Dog Street Band. The three core members grew up on the streets, and all have busking in their personal histories. Thus, we have the once wandering vagabonds – main vocalist/guitarist/banjoist Benjamin Tod, his life partner, fiddler Ashley Mae, and upright bassist Jeff Loops along with occasional contributions from slide guitarist Douglas Francisco, joining together for a raw, string band acoustic sound chronicling, as they put, "a glimpse of climbing out of hell." Simply put, the trio has adopted the two-word descriptor – "dark country."

Steve Earle marked his own sobriety with his album "Train a Comin'," which leader Tod cites as his model for this one. Yet, while Tod details the struggles of sobriety, the predominant themes are bound both in reflection and looking forward, above all identifying what is real and authentic in a messed-up world. Instead of seeing everything in altered states, the now clear-headed, clear-eyed narrator needs to make sense of a world he sees through a new lens.

This brutally honest approach proves cathartic in tunes such as the emerging from addiction "Fighting Like Hell to be Free"- "I'm weary and wasted I'm guilty of chasin' some lie that will satisfy grief" or "Losing Again" which details the one step forward, two step back struggle of remaining clean.

The most impactful tune of all, though, is "What Keeps Me Up Now" where Tod reveals his inner thoughts like the racing minds many of us have on those restless nights where one image usually startles one awake. Here's his – "The belt was a noose when I came to on the ground." Yet, the raw honesty and bleak imagery all seems to lead to a triumphant redemption in the banjo-driven joyous "I Believe" (Glory II), celebrating his relationship with Ashley that has sustained him through his patchy course. Until this point, the music has been uncommonly raw with much of it are dirge-like tempos, befitting the thought patterns. Tod becomes like the movie character who one can't help but root for that thankfully seems finally headed in the right direction.