Something Borrowed, Something New: A Tribute to John Anderson (Easy Eye Sound, 2022) 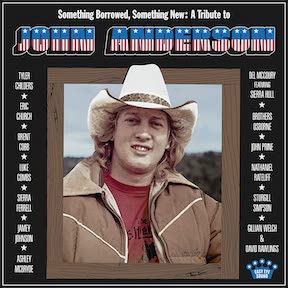 It might be said that John Anderson is an underrated country artist. You just don't see his name regularly dropped the way you see, say, George Strait's. However, the "Something Borrowed, Something New: A Tribute to John Anderson" makes a good case for this man deserving legendary status. The fact that the album features mainstream stars, like Ashley McBryde and Brothers Osborne, as well as the bluegrass great Del McCoury and alt.-country stars Sturgill Simpson and Tyler Childers, proves his influence and inspiration reaches far and wide.

Perhaps surprisingly, the collection doesn't include a cover of "Swingin'," one of Anderson's most popular hits. It nevertheless features many of his best songs, matched to fine performances. Some of these are perfect matches, too, in fact, such as Eric Church doing the swampy "Mississippi Moon" and Jamey Johnson's rough-edged "I'm Just An Old Chunk Of Coal (But I'm Gonna Be A Diamond Someday)." Nathaniel Rateliff's soulful "Low Dog Blues" is also right on the money, while Sierra Ferrell brings plenty of gentle vulnerability to "Years." "You Can't Judge A Book (By The Cover)" sounds just like one of Brothers Osborne's own songs.

There isn't a bad cut on the project, which opens with Ashley McBryde telling the "Straight Tequila Night" story. It's a little sad to hear the late John Prine's version of "1959," while Del McCoury brings just the right amount of melancholy to "Would You Catch A Falling Star." Yes, there's lotsa sadness here, which is usually true about the best country music.

The Black Keys' Dan Auerbach and David Ferguson produced Anderson's "Years" album a few years back, so their love of Anderson and his music was already established beforehand. They bring that same love to this thoughtful, well-matched album of covered Anderson songs.