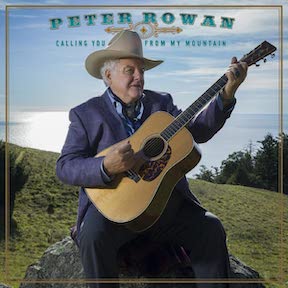 It's been nearly six decades since Peter Rowan came to national renown as lead singer and guitarist for Bill Monroe's Blue Grass Boys, and it will likely come as a shock to many bluegrass fans that he turned 80 years old on the Fourth of July this year. Nonetheless, retirement or even slowing down doesn't seem to be part of his ongoing career plan as his new release is his fifth in the past decade.He also maintains an active touring schedule with his current band: Chris Henry (mandolin, vocals), Max Wareham (banjo, vocals), Julian Pinelli (fiddle) and Eric Thorin (bass). Joining in on this disc is a sterling cast of guests that includes young Americana phenoms Molly Tuttle and Billy Strings as well as Nashville veteran Shawn Camp.

From his days as a teenager on the Boston bluegrass scene with Joe Val, the Lilly Brothers and others, through his time with Monroe and later collaborations with the likes of David Grisman, Jerry Garcia and Vassar Clements, Rowan's voice has always sounded time worn and experienced beyond his years, and it's comforting to hear in this baker's dozen tracks he's still got the ethereal quality that made him and Monroe such a powerful vocal pairing. As was said by some about Ralph Stanley in his later years, it's almost as if Rowan has reached the stage in life of sounding as old as he's always wanted to.

All 12 tracks are well arranged, produced and performed, and while most of them are Rowan originals, he pays nice tributes to Lightnin' Hopkins ("Penitentiary Blues"), the Carter Family ("Little Joe") and Woody Guthrie ("New York Town") along with a spirited Monroe instrumental, "Frog On The Lilly Pad."

A trio of tunes stand out in particular. "The Red, The White and The Blue," a duet with Tuttle finds Rowan looking back on his birth during World War II, his childhood that witnessed the Korean War and his coming-of-age during Vietnam. Having embraced Buddhism in his youth, the song is an earnest plea to end the "war machine," and Tuttle's clawhammer banjo adds a perfect footnote.

Rowan has spoken in interviews of an early morning bus breakdown during his time with Monroe, and how the sunrise inspired the two of them to compose "Walls of Time," which became one of Monroe's most compelling and enduring recordings. "Light At The End Of The World" carries much of that same mournful, minor-key energy.

In a more up-tempo vein, "The Song That Made Hank Williams Dance" features a back-and-forth with Camp that captures the relationships with women – or lack of them – that fueled so much of Hank's music and career.

Peter Rowan has never been afraid to stray outside the boundaries that much of the bluegrass world insists are there, but he learned his craft from the masters, and he's still among the best at it.