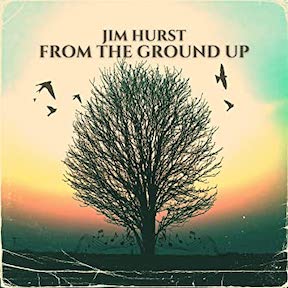 Jim Hurst remains under-known within the acoustic and bluegrass worlds despite a career of considerable length with numerous accolades. Twice the IBMA's Guitarist of the Year, Hurst has served as a sideman and compatriot to many including Claire Lynch, Missy Raines, Holly Dunn and Trisha Yearwood. For more than a decade, he has performed and recorded under his own name and led the Jim Hurst Trio.

As he previously did for the well-regarded "Second Son," for "From the Ground Up" Hurst has recruited a 'who's who' of bluegrass instrumentalists and vocalists to create as satisfying collection of music as we are likely to encounter this year.

Darin and Brooke Aldridge join in on the singing of "Sunnyside Garden," a touching Jack Shannon song; bluegrass has needed a fine 'old folks' home' song with a more uplifting ending than "Bed By the Window," and this song has a number of ear-catching lyrics including "a scholar of dirt, faded blue jeans and a Merle Haggard shirt." Also featured alongside the Aldridges and Hurst on this number, as well as the equally impressive "A Stones Throw Away" are Alan Bibey (mandolin,) Christian Ward (fiddle,) Steve Wilson (banjo) and Michael Gaisbacher (bass).

Adding to the consistency of the album, several musicians appear on various songs in different alignments. Shawn Lane (fiddle and mando) shows up several times, including impressively on "John Williams" and "Weary Old Highway." Dale Ann Bradley sings on "Back to the One" while Michael Cleveland (fiddle) and Kristin Scott Benson (banjo) and Wayne Benson (mando) contribute to "Nothin' To Do But Pray," another well-written song, one of three from John Cadley.

Hurst's guitar playing is beautiful. At times, he reminds us of Doc Watson's righteous clarity. Elsewhere, he harkens to the misty darkness of a time before memory. And then, as on "Weary Old Highway" and "Easy Does It," he presents as a contemporary country and 'grass master. His singing remains stout and smooth, gentle and emotive, as fine a combination as we could seek.

Jim Hurst's "From the Ground Up" is a terrific bluegrass recording, and we haven't had a lot of those come our way in the last year.