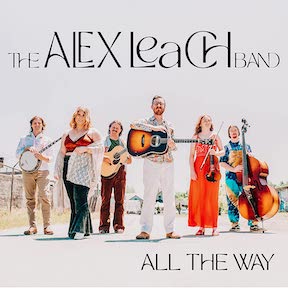 As he's matured, many of us have grown up with Alex Leach. He knows more about bluegrass than most of us can pretend to. Now into his early thirties, Leach not only continues to host his weekly "Bluegrass Special," but brings us the morning show each day from Knoxville's venerable home of Americana and bluegrass, WDVX. Once a member of Ralph II's Clinch Mountain Boys, Leach has been fronting his own band for several years.

While in many ways a traditional bluegrass sounding outfit, the Alex Leach Band infuses more than a little hippie-trippy jam band vibe within their presentation, making their uplifting approach to the music increasingly appealing with each release. "All the Way" is their second album, following last year's Jim Lauderdale-produced "I'm Happiest When I'm Moving" and a previous Alex Leach independent project, "Why Sure It Is!"

Over a number of years and recordings, Leach (guitar) has developed an individual vocal style, one that is honest and nuanced; not blessed with a classically gorgeous bluegrass voice, Leach works with what he has, and throughout the album, he demonstrates that there is beauty found within a naturally, rustic voice well-utilized.

His cadence is of interest within songs like Joe South's (by way of Cliff Waldron) "Walk a Mile in My Shoes" and "Today (Could Be My Last)" and on Paul Simon's "Slip, Slidin' Away" (in duet with his spouse, Miranda) and the very impressive "Lineman in The Rain," he expresses not only musical passion and enthusiasm, but a gentle confidence that has emerged with experience.

The uplifting title track, which has a bit of a "Let Your Love Flow" vibe and the faith-based "Up to You" are simply terrific bluegrass songs. "Little Secret" is a fine song, with another original "Loveland" presenting an even more expansive approach to the music.

Miranda Leach takes lead and duet vocal turns including on her very well-presented "The Game Is Always Different." "Wanderlust," a Leach-family co-write, is Miranda's showcase, a song that further enhances the band's flavor of bluegrass. The only other regular member of the Alex Leach Band to appear is bassist JT Coleman.

Those rounding out the musicianship on the Jon Weisrberger-produced recording include the always welcome Roscoe Morgan and former member Joshua Gooding (mandolin), Jason Johnson and Derek Vaden (banjo), and fiddlers Carley Arrowood, Chris Sexton, and Bryan McDowell. Chris Castle adds pedal steel to a pair of songs, including the closing "High Tide."

A strong bluegrass album with natural charm and well-executed lead and harmony vocals and musicianship. Recommended.

CDs by The Alex Leach Band