This is the Heavy (River House/Sony Music Nashville, 2022) 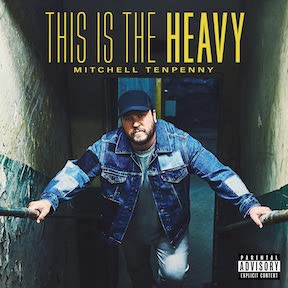 Mitchell Tenpenny calls his album "This is The Heavy" because "it's big. It's loud. It's in your face and drum heavy," he said. In contrast that is not at all how one would describe most country music. Thus, Tenpenny's lengthy album (a whole 20 tracks!) is country-associated, at best.

The song titles, at least, read like country songs, including "More Than Whiskey Does," "Good And Gone" and "Good Place." The latter finds Tenpenny stating: "I'm not in a good place, but I'm in this bar/So, I'm in a good place for a broken heart." That's certainly a country song setting. He sings it over a semi-dance-y groove, and it could have been an acceptable country song, with a country-instrumented arrangement.

Tenpenny has a distinctive voice, which leaves everything he sings sounding somewhat soulful. But ironically enough, those aforementioned loud drums are at their pounding-ist during "Elephant In The Room." (That 'elephant' within these sonic four walls is anything but country). With its bottom-heavy groove, this one doesn't even pretend to be a country song. With "Happy And I Hate It," Tenpenny gives us his best INXS meets Hall & Oates impression. The organ accented "Now We're Talking" sets the overactive drum kit aside for a mere moment, but by now it's too little, too late.

With a voice like Tenpenny's, it's such a waste to use it on forgettable pop music. Heavy music has come off this light.