Somewhere Between The Secret And The Truth (Thirty Tigers, 2022) 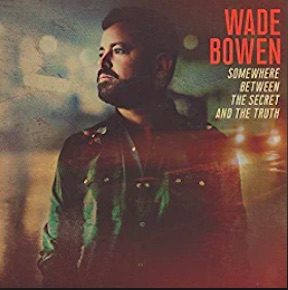 It's always rewarding whenever the meaning of song sneaks up on you, which happens with the tile track ("Somewhere Between The Secret and The Truth") of Wade Bowen's fine album. He sets us up all the way through, dropping hints about all the little ways he's keeping secrets from his spouse. It's sung so sadly and regretfully you just know he's going to end the song in an illicit affair. But that's not what happens. Instead, he drives straight home to his woman, completely evading the temptation to cheat. This is just so anti-country! Cheating songs are a big part of the genre's history, but this is an entirely different kind of country song – a nearly-cheating song, if you will. It caps off a 12-song collection of strong, smart country music.

There are plenty of other standout tracks as well. "It's Gonna Hurt," for instance, tells the cold hard truth about breakups. Bowen tells this hurting one, "Everyone says you'll be fine/That the wounds will heal with time." That's the cliché we all repeat, right? Then Bowen adds, "But the truth is all your friends/Are relieved it's you instead of them." Ouch! Bowen sings it sensitively over a steel guitar-accented piano-based arrangement. He's plays the friend that tells you what you need to hear, instead of what you want to hear.

Bowen gets writing help (and vocal assistance for "A Beautiful World") from Lori McKenna on some of these tracks, while Vince Gill lends his voice to "A Guitar, A Singer And A Song." Much of the music is slow and sad, although Bowen revs it up mightily during "Honky Tonk Roll," which sounds closer to a Travis Tritt rave-up than much of the brokenhearted country filling out most of the album. This one features organ, Southern rocking electric guitar and a pounding acoustic piano.

Although nothing else has a surprise ending like this album's title track, it's nevertheless consistently top tier all the way through. Like one of this album's lyrics states, Bowen is on "a hell of a honky tonk roll" here.