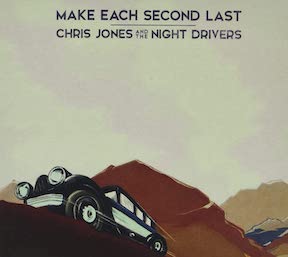 Chris Jones has become one of bluegrass music's most recognizable voices, bandleaders and personalities. His rich, melodic baritone is pleasingly distinctive, and via his leadership of the Night Drivers approaching 30 years, he has played across North America and Europe. As an award-winning songwriter, humorist and broadcaster, he has become a bluegrass 'household' name.

"Make Each Second Last" already had a number of chart-toppers released as singles by the time it hit the market. "Whither You Roam," "Quiet Click" and "We Needed this Ride" each received considerable, deserved attention upon initial release. A diverse selection — the first up tempo and devoted, the next pensive with resignation, the latter uplifting and affirming — these three Jones compositions provided a formidable introduction to a strong album.

Additional singles co-written with Thomm Jutz, "Riding the Chief," inspired by Jones' youthful, summer train trips to visit his father in Albuquerque, N.M., and "Bed of Snow," further bolster the recording. "Riding the Chief" is especially appealing as this number captures the sepia-toned, burgeoning independence of youth: the feeling is universal.

While the Night Drivers have experienced turnover these last several years, the sound of the group remains as strong as ever. Always presenting a smooth, mature, and restrained approach to bluegrass, veteran players, but band newcomers Grace van't Hof (banjo, baritone ukulele, and accordion) and Marshall Wilborn (bass) have slid into the group, and their personalities most obviously blend with Jones (guitar) and Mark Stoffel (mandolin). Jones takes all the vocal leads with his bandmates harmonizing. It truly feels like a group effort, down to the artwork and design being credited to van't Hof.

Jones' spouse, Sally, and daughter, Joanna, provide harmony on "Silver City," while Carley Arrowood fiddles on that song as well as "Bed of Snow."

The song "We Need to Hear from You" may contain the album's most pointed and valued message. Co-written by Jones and Jon Weisberger, the song is a welcome invitation to sensible, intellectual thought given the past few years, filled as they have been with rancor, alternative facts, and disinformation:

There is always risk in expressing
That which you know to be true
This is no season for silence
We need to hear from you.

"Make Each Second Last" is thoroughly engaging. Jones' guitar playing is always brilliant — he has one of the steadiest and most under-acknowledged right hands in bluegrass, and never fails to provide perfect tone and rhythm to his songs. The Night Drivers never disappoint, and this latest recording is further evidence — if it was needed — that they remain one of bluegrass music's finest outfits.