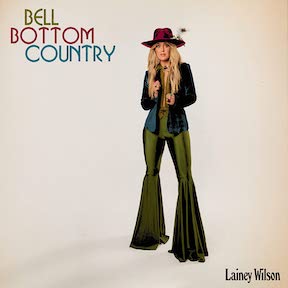 Lainey Wilson was named Billboard's Top New Country Artist of 2021, ACM 2022 New Female Artist of the Year, CMT's 2022 "Breakout Artist of the Year" and scored six CMA Awards nominations, some impressive achievements for a relatively new face on the country music scene. This new album only confirms that she is a unique talent with her own sound in a genre that usually rewards conformity and sameness.

There is as much rock 'n' roll in these tunes as there is country music, but Wilson's irresistible drawl pins her down in the tradition of female country rockers like Bobbie Gentry, bluesier cousins like Susan Tedeschi and contemporaries such as Miranda Lambert.

"Hillbilly Hippie" points to her ethos, stirring her musical gumbo with equal parts Creedence Clearwater Revival, Bonnie Raitt and Tom Petty to come up with vaguely funky and convincingly rocking tunes. She co-wrote every song, save the closing cover of the 90's rock hit from 4 Non Blondes, "What's Up," and it's to her credit that she manages to make even that overwrought anthem palatable and relatable.

Wilson isn't immune to bad country cliches. On "Weak-end," she forces the title turn of phrase into the most generic tune on the album, but the lyrics will hit home with her target audience of brokenhearted country girls anyway.

More often than not, however, she's spot-on enough with a lyric to make you repeat a song to make sure you heard it right. The banjo-driven "Hold My Halo," for example, frames the daily struggle in a way that anyone can relate to, an otherwise 'good girl' letting off some steam.

Musically, Wilson takes the kind of chances a young artist rarely does. From injecting serious funk grooves into the appropriately greasy grooves of "Grease" to the atmospheric arrangement of "Wildflowers and Wild Horses" that makes it sound like a lost 70's country rock classic from Dolly Parton.

Wilson is proving adept at tapping into the contemporary country fan's desire for something with a little more than just twang and typical lyrical tropes while still staying within an acceptable commercial framework, with this album showing off her originality and musical range.