Can I Take My Hounds to Heaven? (Hickman Holler Records/RCA, 2022) 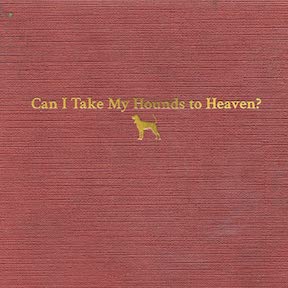 At nearly two hours long, just listening all the way through Tyler Childers' gospel release is a challenging project in and of itself. It's an eight-song album, but each of these eight songs is played three different ways. Recorded with his band The Food Stamps, these three 'albums' are also given descriptive names. Hallelujah versions captures Childers and his band playing live in the studio during a two-day period. The Jubilee selections pile on the instrumentation, including horns, strings and backing vocals. Lastly, the Joyful Noise edition is a collection of remixes by DJ Charlie Brown Superstar (Brett Fuller) and features samples ranging from some excerpts taken from a church service to clips derived from the old Andy Griffith Show. With that much time and effort, this music and religious upbringing is obviously important to Childers.

The most noteworthy song on the set is Childers' "Angel Band." Unlike the bluegrass/gospel standard with the same name, Childers' heaven is an inclusive universalist home up in the sky. In his heaven, "there's Hindus, Jews and Muslims." Such a description might not go over well with fundamentalists, but this is Childers' vision, after all.

For the title track, Childers has a little fun with fire and brimstone revival meeting sermons. While these ministers are preaching against drinking and smoking, this guy's more concerned about whether or not he can take his dogs past the pearly gates. "If I can't take my hounds to heaven/If I can't hunt on God's land," this character states, "I'd rather load my dog box up and go to hell with all my friends." Well, we all have different priorities when it comes to the afterlife.

If you can get past Childers' theology, however, this is a powerful recorded piece. Childers sings like a man of faith on fire. Listening to the piano, organ and overall churchy feel of the Jubilee "Angel Band" is a spiritual experience – at least of some kind. The horn section that comes in at the end of it is like a sonic exclamation point atop a strong musical statement.

Yes, you're going to need to set aside a large block of time to fully experience Tyler Childers' gospel extravaganza. However, it's well worth your time. Whether it's country, Americana or (now) gospel music, Childers always puts his unique fingerprint on everything he creates, which makes him an artist of the highest caliber. Here, he is both extremely ambitious and also extremely successful.