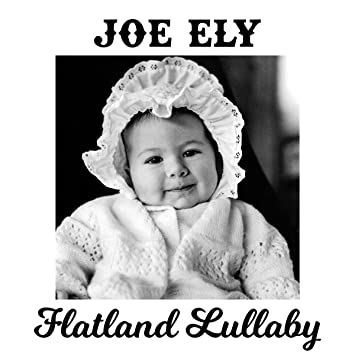 The songwriter's prime directive is to translate personal observations and emotions into creative expressions that are more broadly universal. So what happens when a songwriter follows the inverse formula, and channels some of the most categorically omnipresent human feelings into songs that are aimed at the narrowest possible audience? The answer to that rarely considered question is all over Joe Ely's latest archive release from his own Rack 'Em label, the highly personal and wonderfully relatable "Flatland Lullaby."

On the surface, "Flatland Lullaby" offers a sonic approach that could easily be interpreted as a bookend release to the quiet majesty of 2015's "Panhandle Rambler." The difference is that, like a lot of Ely's albums, "Panhandle Rambler" was a paean to the landscape of his beloved homestate of Texas and intended for anyone who is similarly inclined, while "Flatland Lullaby" was written for an audience of one; his daughter, Marie.

Beginning in the '70s, when Ely was still a member of The Flatlanders with Jimmie Dale Gilmore and Butch Hancock, he began writing and stowing songs that were beguiling in their relative simplicity. After Marie's birth in 1983, Ely began recording the songs in his home studio and eventually gave her the finished album as a Christmas present when she was a toddler. The tape circulated to friends and neighbors, but it was Marie herself who perpetually championed the idea of releasing "Flatland Lullaby" to the wider world.

And no wonder. "Flatland Lullaby" is brimming with joy and whimsy from the NRBQ-ready Western swing oompah of "The Cats and the Rats" to the Germanicana stroll of "Wake Up Sunshine" to the quietly jaunty "Rock My Baby to Sleep."

In keeping with Ely's impossibly eclectic catalog, "Flatland Lullaby" offers a unique and diverse sonic pallette; Lyle Lovett would have a blast covering "The Gypsy Lady," and Ely steers straight to the aching heart of the Kimmie Rhodes/Emmylou Harris ballad "Love and Happiness for You" and his co-write with Butch Hancock on the lilting title track.

Joe Ely may not have had the world in mind when he composed the songs on "Flatland Lullaby," but the world will thrill with the same delight that Marie Ely has been enjoying for the last 38 years when they hear this fresh-as-yesterday album.