For Robert Gordon and Chris Spedding, it's now or never

Robert Gordon can't recall exactly where he was or what he was doing when he heard that Elvis Presley had died, but he definitely remembers how he felt. "It was just heartbreaking, and I literally just didn't go out of the house for like three days, and I just listened to his music," the singer reminisces from his New York home. "I think I wept when I first heard the news. It affected me, and that was strange because I didn't realize that I would ever be affected like that. It just really hit me hard." 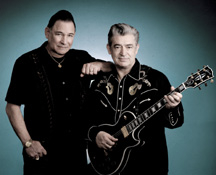 That was 1977. It is now the 30th anniversary of Presley's death, and Gordon is currently paying tribute to him with a new album on Rykodisc done with guitarist Chris Spedding, "It's Now or Never."

Asked if recording a collection Elvis tunes in his own inimitable style was a long cherished dream project, Gordon chuckles and replies, " Not really. In fact, I shied away from it for many years. But we felt that it was the right time, being that it's the 30th anniversary of Elvis' death."

However, Gordon is quick to acknowledge Presley's impact. "In all honesty, when I was nine years old, I heard "Heartbreak Hotel,' when it was on the charts...and that just blew me away. I don't know if that had any bearing on me becoming a singer or not, but I had never heard anything like it. It just got into my soul, and I think that was the turning point for me. You know, Elvis is one of my main influences. I can't deny it. There are many others, but he will always be right at the top of the list."

Ironically, Gordon rose to fame shortly after Presley's death. Until then, rockabilly was at best, a European phenomenon with only pockets of support in the underground punk and oldies scenes, respectively. Once Presley died on Aug. 16, 1977, American fans began to realize that the early music he created was in serious danger of becoming extinct.

However, it's important to note that Gordon had embraced those rebellious sounds prior to any official declaration of a revival - he had cut his first LP months prior to Presley's passing - subsequently emerging as the first mainstream act of his generation to be billed as a rockabilly.

Although Gordon is rightfully chagrined by the rockabilly tag - he has sung pop, country, and punk during his 30-plus year career - his LPs for Private Stock and RCA capitalized on the genre association by featuring " 50s guitar god Link Wray and tunes associated with the likes of Jack Scott, Gene Vincent and Johnny Burnette. Indeed, Billy Lee Riley said that of all the modern practitioners who perform his raving rockabilly standards " Red Hot" and " Flying Saucers Rock and Roll," " Robert does "em the best!"

The singer's first official nod to the King occurred on 1978's " Fresh Fish Special," an album title inspired by the prison haircut Presley's character received in the movie " Jailhouse Rock" and included "I Want to Be Free" from the film's soundtrack. 1979's " Rock Billy Boogie" LP featured a smart recreation of Presley's seasonal favorite, " Blue Christmas."

However, it wasn't until recently that the Washington, D.C. native gave serious consideration to recording a full album of Presley tunes. Deciding that the project would provide " a little closure," the singer threw himself into it with gusto.

Gordon's previous studio disc - 2005's " Satisfied Mind" - was leased by Koch's Nashville affiliate. Augmenting his "50s rock ‘ n' roll style with the "60s Nashville Sound, the album was a career highlight for the singer. That said, once Koch closed its country division, he was left without a label and he needed the support of a good friend to get the ball rolling again.

"Fortunately, I have a dear friend named Kenny Caskey," explains Gordon, " who's listed as executive producer on the record, who backed the project. Otherwise, it never would have been made. Once we decided to do the Presley thing, I knew who I was going to use because I had done the Koch record down in Nashville, and I liked Johnny Neel and Jimmy Lester very much. We worked with a new bass - player Dave Polmeroy, who was a pleasure to work and a fantastic player. So, I felt that with these players, I couldn't go wrong."

"He's really the man that works best for me on stage," observes Gordon who has worked with such guitar greats as the late Danny Gatton and Wray. " It's a delight to be on stage with him again. Actually, it's been about 13 years since we've worked together live on stage and about 20 since we were in the studio together. So, this whole thing is a real reunion. We had played together for about 10 years, and I think we had taken it about as far as we could, so that was a good long run. I missed working with him a lot over the years, I can tell you that."

"Initially, the connection (for the reunion) came from a good friend of mine, Richard Connolly, who has been helpful in many ways to me. He suggested that I get back together with Chris, and I think he started putting the feelers out first. He spoke to Chris, but it was Arjan Deelen - this guy from Denmark who got us our first tour together in Europe - he made that happen." The result was the rousing live set, " Rockin' at the Paradiso," released on the Last Call label in 2006.

Initially, the new Rykodisc album had been titled " The King and I." "I had that under my hat for many years," laughs Gordon. "I was thinking there was a good chance that "we' re not going to get away with it.' And, we didn't. I was disappointed because I thought it was a great title."

Was Gordon intimidated at the thought of remaking them?

"Well, I didn't really even think about it that way," the singer chuckles. " I just went in to make a good record with great players, and of course, the fabulous Jordanaires. So, I figured that if I did the best I could, it would all work out."

Saying that the play list was mostly " pulled out of a fish bowl," Gordon explains how some tunes were selected.

"‘Don't Leave Me Now' is one I've always wanted to do. I knew I was going to that. But originally, I had no intentions of doing "It's Now or Never.

In fact, I was a little intimidated by that. And, while we were scratching our heads trying to figure out what tune we should do next, (pianist) Johnny Neel said, "Hey man, look - as long as we're down here and have The Jordanaires here, you ought to do a gospel tune.' That's how "Peace in the Valley' happened. I love the song."

Like many other artists, Gordon is in awe of Presley's former background vocalists, The Jordanaires. " They work around one mic... they just know what to do," Gordon says. "These guys are sharp as tacks and talk about stamina. We went in and did this thing with The Jordanaires in one day. They just wanted to keep going. They did nine tracks and did another session afterwards. It's just incredible. Ray Walker is just a riot, and Gordon Stoker is amazing for an 81-year-old."

Contacted in Nashville, Walker, The Jordanaires' popular bass singer, remembers the session well. "Robert does a fine job with his artistry," he recalls. "We had a grand time with him and Chris - They are two fine fellas. We joked about our ages and numbers of ye ars in the business. Chris got a kick out of our, mainly my, picking on Robert. Neither of them had any requests as to how we were to sound, except, to sound like we did on the original records. I told them, we sounded better, now, and I hoped it wouldn't bring them down."

Another key ingredient was supplied by Spedding, whose guitar contributions alternated between his own balls out style and recreations of Scotty Moore's seminal work with Presley. A good example of the latter can be found on " Too Much," wherein the British guitarist recreates Moore's famous runaway solo - which he himself cannot recreate - note-for note.

Despite the fact that Spedding was a full creative partner, his guitar work does not dominate the album. " (N)ormally my albums with Chris have been extremely guitar oriented with solos," explains Gordon. " (This time) we found that this album is devoid of solos on most of the songs... and to tell you the truth, I'm a bit disappointed about that. In fact, I was apologetic to Chris after the whole thing...because I respect Chris, just like everybody. But, he is all over the thing, arrangement-wise. So, he didn't mind."

Asked if he had any other regrets, Gordon laughs, " Since I recorded the record, we started doing some things from a different period like "Little Sister' and "Devil in Disguise.' I'm really sorry that I didn't get around to doing those because they would have really lifted the record."

However, these are minor quibbles at best. The 60-year-old Gordon seems flat-out pleased that Rykodisc is providing the opportunity. "At my age, I'm fortunate enough to have gotten another record deal," he confesses.

More tours with Spedding - who is currently backing Roxy Music founder Bryan Ferry - are on the books, most of them in Europe. " Of course, just to be able to tour in the states now is very difficult, unless you've got record company support," he explains. " Most of the clubs that I used to play are gone."

Then, the singer adopts an amused tone. "I think the Stray Cats are doing a tour with Z.Z. Top. I mean, why the hell didn't they give us a call? Jimmie Vaughan opens up for Bob Dylan. I mean, hell! Bob Dylan came backstage and invited me up to his hotel room when I was working with Link (Wray) when he saw us in a show in London and was pitching tunes to me. I mean, why can‘ t we tour with him?"

"I think it's all just a matter of being in the right place at the right time," Gordon sums up philosophically before cheerfully concluding, " I'm still as optimistic at 60-years-old as I was when I was 15."