The SteelDrivers put blue in bluegrass

Though a new band on the scene, one seemingly intent on bringing a new dimension to the "blue" in bluegrass and with a self-titled debut out in January on Rounder, the Nashville-based SteelDrivers feature an impressive collective resume of talents and accomplishments, both on their own and as side players to the musical elites of both coasts and Music City. 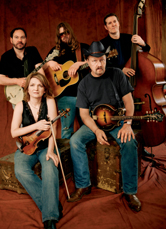 The names of all five - Mike Henderson (mandolin), Chris Stapleton (guitar, lead vocals), Tammy Rogers (fiddle, vocals), Richard Bailey (banjo) and Mike Fleming (bass, vocals) - pepper the liner notes of countless studio projects over the years, and as Henderson acknowledges, it's not as though they'd all been sitting around killing time.

The SteelDrivers, he says, grew out of his songwriting partnership with Stapleton and his yearning to get back into bluegrass.

"Chris and I, we'd been writing about five years, and we were building up quite a catalog of things, and we would write them with a couple of acoustic guitars. Every now and then, I'd pull the mandolin out, but we were trying to write for the market here, the country music market - we're both staff songwriters at a publishing company. I got to thinking that I wanted to get back into playing some bluegrass. It was something I was wanting to do, and I asked Chris if he'd be interested in doing it, and he said yes. So, I called the other three, and they all said yes."

"We got together one time, and it was obvious after the first rehearsal that it was gonna work. The three of them sang well together right from the get-go. We recorded at the rehearsal, and even after the first one, I'd made everyone a CD of it to take home. Over the next couple of days, the phone calls started coming in. Everybody's one-at-a-time going, 'you know, this sounds really good.' So, I think that had a lot to do with it. We recognized right off the bat that we had something cool."

Now 54, Henderson is a Missouri native whose musical roots go back to an era when there weren't nearly as many distractions to compete with important things like baseball. His own career in music would grow out of a backdrop of the music of the late '50s and early '60s, particularly the music his mother would listen to.

"She was crazy about music, particularly the blues, and used to play a lot of B. B. King and John Lee Hooker, stuff like that. So, I heard a lot of that as a kid growing up, and at that time...the Top 40 was based on sales and jukebox plays, so your Top 40 had everybody on it. It had The Beatles, and Frank Sinatra and Dean Martin and Louis Armstrong - just whatever people liked."

"As a little kid with my transistor radio, I heard all kinds of stuff all the time. Every kid in my neighborhood had one of those radios, and when we got ready to play baseball, we'd set 'em all to the same station and put 'em all around the ball yard so we could hear 'em. I just grew up in a time when there wasn't much on TV. Nobody had air conditioning, so we were constantly outdoors, and we always had our little radios going. So, I just grew up hearing a lot of music. About the only time we didn't have our radios on was when we were in school."

Though renowned over the last two decades for his blues guitar work, Henderson relates that bluegrass was in fact his entry into professional music.

"I got into bluegrass about 1971 or 72. I just started hearing it, and it really affected me in a good way, I mean, I really liked it, and I fell in love with the sound of the mandolin and started wanting to learn to play the mandolin, and it seemed that the most mandolin playing you could buy (on record) was bluegrass. I played bluegrass until about 1980, professionally, and at that time, it was really, really hard to make a living at it."

(Henderson also made a living as a songwriter with Patty Loveless, Randy Travis and Neal McCoy cutting his songs. He did a lot of session work as well for the likes of Emmylou Harris, John Hiatt, Kelly Willis and Hank Williams Jr. He released "Country Music Made Me Do It" in 1994 on RCA and put out "Edge of Night" in 1996 on the Dead Reckoning label, which he started with Kieran Kane Kevin Welch, Harry Stinson and Rogers.)

"So, I got into it and then kind of got out of it, and I didn't play much for the last, you know, almost 20 years. I would get my mandolin out every now and then and play the same four or five songs and put it back away. But I wasn't really keeping up with it, and since the SteelDrivers started, I've really made an effort to have a good serious routine about practicing and getting back to where I used to be."

The centerpiece of the band's sound is Stapleton's rough-hewn, bluesy voice, which has invited comparisons to talents as widely varied as Ray Charles, Duane Allman and Joe Cocker, yet is a one-of-a-kind phenomenon that is, Henderson says, simply an expression of who Stapleton is and where he came from.

"Chris comes from over in East Kentucky. He's the son and grandson of coal miners, and he grew up hearing a lot of authentic, old-timey stuff, (and) he has a very wide range of tastes, he listens to a lot of stuff, and that soulfulness you hear in his voice - I don't think he can sing any other way. It's just natural, and he's really, really good at getting inside of a song. Chris just seems to instinctively know what's right for a song, singing-wise."

It can be difficult to match harmonies to a voice as unique as that, but Henderson credits Rogers with having the know-how to get it done.

"That's usually Tammy's doing, since Chris sings most of the leads. Tammy's a wonderful harmony singer. She's sung with Emmylou (Harris), and Patty Loveless, and Reba (McEntire), and you name it. She's just an expert at harmony, and when we rehearse it's usually Tammy that'll say, 'this is your part,' and she's real good at assigning parts (and saying), 'no, no, that's not the right note.'"

He pauses to laugh and continues, "I kind of stay out of it because I don't do that much singing, so I just kind of hear them over there fussing amongst themselves, and then it takes them usually just a few minutes and they get it right."

Most of the album is original material by Henderson or Stapleton (or both), and Henderson points to the opening track as an up-front statement of what the SteelDrivers are all about.

"I think 'Blue Side Of The Mountain' probably is the best one, if you were gonna pick just one to say 'that's what this band is'. We've definitely got a bluesy approach or a bluesy take on it. I don't think it sounds out of place next to, say, 'East Kentucky Home', which is probably one of the more traditional things we do."

It is perhaps the most unusual tune on the disc, though, that Henderson says has drawn the most attention.

"'Sticks That Made Thunder,' I think...represents another kind of element of our deal. It's got a story to it, and I just think it's a little different take than what you normally get. People don't usually describe battles as though they were seen by a tree, and it works. It's one of our most popular songs, live - we get all kinds of requests for that one, from all ages. I mean, from World War II vets down to high school kids. So, that one seems to be striking a chord with a lot of people...The way (Chris and I) wrote it, we tried to make it a Civil War battle with the reference to the colors of the uniforms and all, but you know, it could be any battle - I mean, it could be Iraq."

Looking for more of a "live" feel to the album, the band opted to move out of the usual studio setting and into more of a "performance" arrangement.

"We were actually trying to match the energy that we were getting live.," Henderson says. "We had recorded quite a few of our performances and all of our rehearsals, and we felt like there was something on those recordings that really - it was kind of a hard thing to put a finger on, because when we work live, we only use three mikes - but we were getting an energy live that we hoped we could get in the studio. And I think we did, I think we succeeded."

"We were in a big room with high ceilings, and...I was probably 10 feet away from the banjo and 10 feet away from Chris, and Chris and Tammy were right on top of each other, and the bass was over pretty close to them. We were fairly close together. We tried to do it with no headphones, and we just couldn't make that work, we ended up having to wear headphones."

"But we were still pretty close. I think a lot of the reason the record sounds the way it does - to give Luke Wooten, the engineer the credit he deserves - is there's a lot of ambient mikes being used, getting the sound of the instruments as they sound 5 or 10 feet away, as opposed to just being right on top of it. So, he used quite a bit of that. We were calling it trying to 'get air' on the record, where it doesn't sound like you have your ear 2 inches from the banjo."

The deal with Rounder came, Henderson continues, through the intervention of his longtime friend, fiddler Blaine Sprouse, who had recorded for the Boston-area label over the years.

"Blaine came to hear us a couple of times, and he really liked it, and he called (Rounder boss) Ken (Irwin) and said, 'You really need to hear these guys,' and Blaine doesn't do that kind of thing very often. So, Ken came and heard us, and we had actually been talking to another label, and we weren't getting anywhere with them - I'm not gonna say who it was - but we kept thinking we'd agreed, then we'd get a contract that wasn't what we'd agreed on verbally, so Ken just kind of popped up at the right time and said, 'Well, how about Rounder? You want to come make a record for us?' We talked it over and said yeah."

As much fun as getting the SteelDrivers up and going has been, Henderson says that the songwriting, sessions and touring with others is still their bread and butter, and while there have been conflicts, "It hasn't been an issue too much for any of us, I think. First of all, we've all been pretty understanding when somebody's had something else. Tammy went ahead and played with Reba this past season and had to be gone sometimes 10 - 12 days at a time...but it hasn't really been an issue. I think part of it is, we all have other things to keep us busy. We haven't had to put a lot of pressure on ourselves to make the band pay everyone's bills right off the bat. We've been able to kind of take our time with it, which I think has been real good."