"This album has been a long time coming," Dan Messe admits, when asked about Hem's second release called "Eveningland."

The group, which incorporates bits of country, folk and other stray Americana elements into its soothing musical mix, released its debut "Rabbit Songs" on DreamWorks, and was about to put this newest album out on that same label before the company suddenly folded into a bigger label as part of the Universal merger.

"We weren't sure how this album would be met because it's definitely a bigger sound than 'Rabbit Songs' and has a little more of a pop sensibility in some ways," he continues. "So we worried that some of the hardcore folky part of our audience would not follow us on this journey. But so far the reaction has been really heartwarming. People have loved the direction that we're taking." 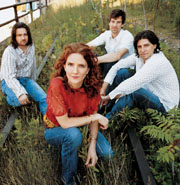 The pre-release buzz on the new direction of "Eveningland" suggested that this project for the New York-based band was heavily influenced by a distinct "countrypolitan" vibe, a term given to some of the better examples of overtly orchestrated pop-country, primarily created during the seventies. Artists like George Jones and Tammy Wynette are closely associated with this sonic description.

But the music on this latest Hem disc probably won't bring either of those particular iconic artists to mind.

"To me, countrypolitan has two sides to it," Messe, who is Hem's main songwriter, explains. "One is like the George Jones country music where they added strings. (But) for us, a lot of these songs are pretty much straight ahead folk songs or country songs that we sort of "poli-sized" by adding an orchestra. And on the other end of it, there are people who do country songs in totally different arrangements. Sort like Ray Charles, of 'Modern Sounds in Country and Western Music, Vol 1.' He just took these great country songs and did 'em the way that he did 'em."

"So we took 'Jackson,' for example, which is that great song Johnny Cash and June Carter made famous, and 'Hem-ify' that. So, it's a starting point. We don't ever want to take a genre and do it verbatim. We're just sort of interested in taking something and making it our own. This is our version of countrypolitan. I would guess that it's been more influenced by countrypolitan artists like Glen Campbell and Bobbie Gentry than the George Jones/Tammy Wynette (wing)."

Messe has praise-a-plenty, and then some, for Campbell and the music he gave to the world back during his unique heyday.

"Lord knows I've been a fan for years and years," he gushes. "His arranger, Al DeLory, I'm a fan of. He did all the string arrangements on, like, 'Wichita Lineman.' There's this sense that anything can happen at any time because it's like this otherworldly atmosphere. If I had to pick one song out of those artists, 'Wichita Lineman' is the song the song that most inspired us when we were making this album. In fact, we listened to it almost every day before we went to work. We never tried to copy it; we just set out to capture some of those musical possibilities that exist in that world."

There's a funny story behind how the band ultimately came around to "Hem-ifying," so to speak, the song "Jackson."

"We went about picking that song in a sort of backwards way," Messe explains. "We had to do an EP for the UK and Ireland because we had sort of released 'Rabbit Songs' a year earlier there than in the States, so it had been a long time since we'd released anything (over there)."

"So we sort of made an EP of covers to sort of tie them over. I was listening to my copy of 'At Folsom Prison,' and there's that great exchange of dialogue that Johnny Cash and June Carter have where June comes up on stage and Johnny says, 'I love to watch you talk.' Then June says, 'Well, I'm talking with my mouth; it's way up here,' because he's looking at her breasts. And I just loved that phrase ("I'm talking with my mouth"), and I knew I wanted to call this EP 'I'm Talking with My Mouth.' That's the intro to the song 'Jackson,' so I thought, well why not try to 'Hem-ify' that song. And we'd been writing a lot of songs about marriage at the time. Like I'd written 'Strays' and 'Lucky,' which are, for me, about getting married and settling down. And that song ('Jackson') is sort of the flipside of marriage. So, it just seemed like a natural. And then we found this sort of great arrangement that sort of brought out the melancholy behind the sass. We just sort of fell in love with it."

About half of the songs on Hem's first album were written before Messe had even met its singer, Sally Ellyson, after placing an ad in the Village Voice. So "Eveningland" represents the first album where Messe has written completely with Ellyson's vocals in mind.

And has this changed Messe's writing style? "Absolutely, a hundred percent," he says emphatically. "Now when I write, I hear her voice. Most songwriters, when they're writing, they hear their own voice in their head. Now for me, it's like a ventriloquist act. I just hear her voice. It definitely changed how I write because my voice is a pretty limited instrument, to say the least. For her, I just know what's going to sound good, and she has so much more ability to take a song to a place that I couldn't ever take a song to. And also because she's so detached when she sings in a lot of ways. She's almost like Karen Carpenter, in that she sings in a very emotionally detached tone that to me is almost more powerful than someone who's injecting all this schmaltz into a song. So it allows me as a songwriter to be more emotional because I'm not afraid of ever becoming thwarted or anything like that."

Ellyson has been outspoken in the press about her love for lullabies, and there is also a distinctly motherly quality in the way she sings.

"When a mother sings a lullaby to a child, she's trying not just to comfort, but also to put a child to sleep," Messe notes. "It's quiet. So even the strongest emotion is sort of tempered. And for me, it's an incredibly compelling sound. And she just captures it naturally. That's her natural way of approaching what could sometimes be very dark songs. In lullabies, the imagery is sometimes very dark as well."

Speaking of children's music and art, Messe is unashamedly a big fan of the film "Willie Wonka & the Chocolate Factory." Not only does he dig this classic Roald Dahl story, but he also - being a musician - appreciates its musical score. "Those arrangements are absolutely magical," Messe enthuses. "For Anthony Newley and Leslie Bricusse - who were the composers/lyricists on that - it was clearly a labor of love with them and that score."

Listening to the cinematic quality of its songs, especially the overall vibe of the new album, it's surprising that Hem hasn't been able to indulge its love of film by doing additional soundtrack work.

"We've never been asked," Messe admits. "When we signed with DreamWorks a couple years ago, that was definitely a part of the talks. I guess they call it synergy between the film and us because we write such cinematic music. But before that (synergy) could happen, they (DreamWorks) went under, so it hasn't happened yet."

Watching its initial major label home fold hasn't seemed to phase this band too much. Hem has learned to roll with the punches in this topsy-turvy musical world, instead.

Just as this new album came out on the band's own Waveland label first, and is now distributed by Rounder, its debut evolved from being self-released, to becoming a Setanta product in the UK, and onto Bar/None in the U.S before making its way to DreamWorks.

The band consists of Gary Maurer on guitar, Steve Curtis on mandolin and banjo, Catherine Popper on bass, Mark Brother on drums, Bob Hoffnar on pedal steel and Heather Zimmerman on violin.

Clearly, this group has learned to stand on its own two feet and not be too overly dependent upon the "music business machine" for its artistic livelihood.

"We were never a part of the industry before it wasn't in turmoil," Messe comments. "So, it just seemed like standard operation procedure for us: You're gonna sign with a label, and that label's gonna go under. We basically have always had to steward ourselves in the business, so it's nothing new for us. We've also been fortunate enough to have a lawyer who is also a big fan of ours and gives us better treatment and more attention than we probably deserve. And he's been very careful about the contracts that he lets us sign. And as a result, we've managed to hold onto all of our masters and really have control over our own destiny, for the most part. Even when we signed with the corporate behemoths."

This act is probably a tricky one for most "corporate behemoths" to handle, since it is a difficult-to-categorize band. It's not twangy enough to be called pure country, but it's also many times more expansive than your typical folk music collective. Similarly, it's equally tough to group its fans into any sort of a nice, neat group.

"I would say the strangest show we ever did, happened when we were touring with Beth Orton," Messe continues. "We played on the floor of a casino in Reno. That was pretty odd. Pretty surreal. What's so crazy is that it was actually an incredibly successful show. You had these people sitting at the craps table, where every one of them came up and bought CDs afterward. Some of them said that we even gave them some good luck."

Messe, at least, probably felt right at home in such a casino atmosphere.

"I have a weakness for gambling," he admits. "My father taught us all how to gamble when we were kids. We needed to learn how to 'gamble right,' as he says. And by being in the music industry, that's probably as close to professional gambling as I'm going to get."

Despite this admitted weakness for gaming, the subject of gambling hasn't yet explicitly made it into Hem's music. "The song "Lucky" from the new album is a little bit about gambling," Messe adds weakly, though.

In case you're wondering, Messe is not the son of a professional bookie or something lowbrow like that. Instead, his parents are both psychologists. But they're also not musicians, either.

"They're music lovers, for sure," Messe says. "I was weaned on their record collection, and it definitely made me who I am today. And they've also never discouraged me from becoming a musician, which is another great gift that they gave me."

With this parental encouragement, Messe has been able to create musical gifts like "Eveningland." And in the same way that this release crosses multiple musical lines, it also blurs the borders - lyrically - between a sense of childlike wonder, and a more mature adult contemplation.

"I wanted to create a mythical place, almost like a fairytale place. But one where I could talk about things that were sort of dark," Messe explains.

"Eveningland" may detail a long day's journey into a particularly dark night, but it's also a unique place well worth visiting.