David Lee Murphy is still trying to get there

David Lee Murphy must have thought he may become dust on the bottle. After all, he had not released an album in more than six years and "Tryin' to Get There" was released on a label that while usually putting out quality music had yet to see of its releases break big.

Until now. The Illinois native is back on the charts with "Loco," a song that has a Jimmy Buffett bent. 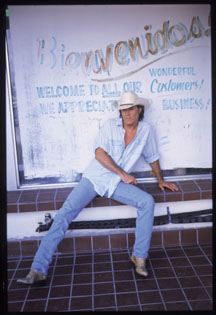 "It's definitely got that kind of vibe," says Murphy, in a telephone interview from Nashville where he is based, of the song he wrote with frequent, longtime songwriting partner Kim Tribble.

And Murphy, whose music has a good amount of guitars, sometimes Stones-style, while keeping it country, seems quite happy on Audium Records, also the home of folks like Dwight Yoakam, Robert Earl Keen, The Tractors and Daryle Singletary.

"I had considered other labels a few years prior to that, but I had talked with Nick (Hunter, the head of Audium) and to some other indie labels. But I really like Nick Hunter and the people that they had down there. It seemed right. It seemed like the place to go."

"Actually I do feel like the timing is right," says Murphy of "Loco" and his brand of country. "It feels really good."

And unlike some artists, who seem to pay little attention to the charts, Murphy was very cognizant of how "Loco" was climbing.

"We're just having fun. I don't want to really guesstimate how the record is going to do, but we're getting a lot of great feedback from radio stations around the country."

Some might say it was about time for Murphy, who once upon a time had a pretty good career going.

Murphy left Illinois for Nashville in 1983 with the idea of pushing his songwriting skills to eventually put out his own record. He formed a band and played the club circuit.

Murphy managed to get a few cuts covered including "Red Roses Won't Work Now" by Reba McEntire and "High Weeds and Rust" by Doug Stone.

Murphy's manager also pushed his client at record companies, sending out demos to them.

MCA signed Murphy and also chose the song "Just Once" to use on the soundtrack of the bull riding movie, '8 Seconds" with Matthew Perry. Murphy's first song to hit the charts had help from Tribble. The song wasn't a big hit, but it got Murphy's name out there.

But by Murphy's third release, "We Can't All Be Angels," out in 1997, his luck had changed with no single reaching higher than 25 on the Billboard charts and a career perhaps in limbo.

And it had nothing to do with the quality of the album. The music was not a radical departure at all from his first two releases. But the marketplace displayed an increasing tendency towards merging country and pop music, meaning folks with a bit of an edge to their music weren't making it any more.

Singers like Mindy McCready, Bryan White, Ty Herndon and Kevin Sharp topped the charts. The twangy side of country was giving way to the pop sound of Shania Twain and others.

Looking back, Murphy still isn't very happy with the label's push behind the music.

"I was in the witness protection program (with the third album)," says Murphy. "I don't know. I thought it was a pretty good album. My wife thought it was the best of the three on MCA, but anyway..."

"That was a period of time where there was a lot of corporate buying out going on, and it just didn't get out there. Nobody heard it. They didn't (promote it). It just didn't happen. That was it. That's okay. Everything happens for a reason." Murphy's tenure with MCA was over after "We Can't All Be Angels' fell flat.

Sometimes artists look for a label deal right away.

"I made a conscious decision after that whole thing just to kind of start writing songs and pull it back a little while, and I stayed at the farm."

Murphy did not disappear off the face of the earth though.

"I was playing out - I went to Europe. I went to Australia a couple of times. I toured the states and Canada every year. I was out there on the road. I just wasn't touring as hard, and I wasn't worrying about trying to do anything but have fun and go out on the road. I wasn't trying to make records. I didn't want to go out and get a record deal."

"I just wanted to pull over and park for awhile," he says. "I was wondering if what I was doing musically was what they wanted. It might need to come back around to me. I think that's kind of what's happening now. I think what I was doing was falling out of favor. I wasn't going to do something that wasn't me naturally. I just kind of hung out."

But eventually Murphy apparently figured it was time to get back in the race.

"That seemed to be the wave of the future in Nashville. I had talked with Nick Hunter for several years about doing this and never did. I also wanted a song to go to radio because I felt I had hit songs still, and I felt I could get a song on the radio. They were still playing 'Dust' 500 and 600 times a week. Same with 'Party Crowd.' I was still getting airplay. I wanted to have a single, and I wanted to have it come from a smaller label. The team of people that we have over there is really great. It's exciting and it's fun. Everybody is focused. We're having a ball."

In recording "Tryin' to Get There," Murphy says he wanted to make a record that would stand the test of time.

"Every time I make a record, I make a record that (I hope) people are going to be listening to 10 years later, (that) they are going to say this sounds as good now as it did 10 years ago. I always want to make music that stands the test of the time. I have heroes like Waylon and Willie, and I still listen to those records, and they still sound great to me. Those are the records that I still want to listen to. It's not the sound, the recording. It's the vibe. It's the mood it puts you into. I want to make records that put you into a certain type of mood and make you feel good and make you want to party and forget about the stuff in your life that you might want to forget about temporarily."

And the Waylon vibe remains quite obvious here thanks to the inclusion of one of the last songs that Waylon wrote, the title track.

The two met again at a Nashville radio station. "I was a huge Waylon fan," Murphy says. "I was asking him about his earlier records and guitar parts and production things. I know all those Waylon records backwards and forwards. I was asking him about different things in the records and songs just from the point of someone who loved his songs because I grew up on them. We hit it off."

The title track was written about five years ago.

"I started writing at my house which is outside of Nashville. I went over and got the idea. He said, "hoss I really like that. We ended up finishing that song at his house."

"We actually wrote four songs together and recorded all four songs...He was going to sing 'Tryin'.' We cut that in his key, but he had sung the other two songs. It was getting late in the day, and Waylon was not really feeling good that day. He took off, and said, 'you might (be) singing that other song.'...I sang the song. I had done a scratch vocal on it...I ended up singing the final vocal on 'Trying''. He was like, 'man, I really like the way you're singing that'."

"The other two sound like vintage Waylon. Something's going to happen with them," says Murphy, indicating that his widow, Jessi Colter, will release the music.

One of the most interesting songs on the new disc story-wise is "Ghost in the Jukebox." A reporter comes to a bar to investigate reports of a mysterious jukebox. "In reality all the regulars are protecting this jukebox," says Murphy. "What they do is sit down and have a cold beer and close the door and play their hillbilly favorites. I just like the whole story. And it feels really good too."

Murphy seems to be also, based on how life has been with the new album and single.

"We're having fun and just excited and happy and loco."