Armed full of razor-edged influences such as Steve Earle and the Kentucky HeadHunters, Nashville's Trent Summar & The New Row Mob aims to shake things up a bit in Guitar Town.

"It's a hallmark record for me," says Summar, once lead singer of the late Hank Flamingo, which had one album on Giant in 1993. "We're really proud of this record. We're pretty serious about it. I had the opportunity to make it with my friends. It sure cranks my tractor." 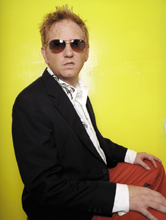 And boy does it rock. Imagine Earle's most rocking music, turned slightly up. Asked to describe what he does, Summar has quite a definite description.

And it's not quite like anything else coming out of Nashville these days. Also unlike much of what Nashville produces these days, Summar's album was recorded relatively cheaply.

With such tracks as "I'm Country" and "Colene," Summar said he built a sound that hearkens to his high school days in Greenville, Tenn.

"I love (Alabama's) early stuff," Summar says. "I don't know anybody my age who didn't get into their stuff when I was in high school. They were cool. Nobody liked country very much. I did. I was listening to Charley Pride, Waylon Jennings.

"Steve Earle's 'Exit-O' was a big influence on me," Summar adds. "It came when I was just gettin' out of high school. Foster & Lloyd influenced me at the time, Jason and The Scorchers, Georgia Satellites. It's time to take country back."

But Summar's tastes run deeper. It seems that his formative years spent in East Tennessee's hills had its effect. Get this: he's a bluegrass fan. Big time.

"Most of my CDs are bluegrass. I'm a Stanley Brothers fan. I'm really into Larry Sparks, too," he says.

Yet with such strong response to tracks like "Lookout Mountain," don't look for Summar to trade in his hard-edged sound for mandolins and banjos anytime soon. Written after a trip to the Chattanooga, Tenn. tourist spot, the song stands out on a standout album.

"So many people have turned on to that song," he says. "It's kind of like an English pop song. We recorded this thing in the basement of a real studio. It was fantastic.

"I wrote it after going up there last year and seeing Rock City," Summar says. "I remember going through the parking lot of Rock City and going, 'Well, I've seen Rock City...' I like to get a good chuckle, ya know. Word conservation."

It's obvious, that including the album's to-the-point tunes, Summar's sound holds little in common with much of his Nashville brethren. Still, he's not one to criticize. Much.

Not that Summar's fortunes have been bad. For a relatively unknown artist such as he, good fortune keeps popping up. First, with his record company.

"We have a fantastic label. They listened to me from the very beginning," Summar says. "They allowed me to pick the photographer and the art director, video director, producer and the musicians. We ran the songs through Harold Shedd. He knew what we were going to cut. You don't want to pass up the opportunity to have someone who's as experienced as Harold Shedd to hear your songs."

Secondly, Summar's managed to latch onto an opening spot for several shows with Willie Nelson.

"We're opening for Willie next month," he says. "It looks like we're doing Farm Aid. You'll freak out on this band. We're like Ringling Brothers, a full frontal assault."

"It may not happen, but I want to do that,' he says. "They let BR5-49 and Jim Lauderdale play, so if this record does enough, you never know."

And if the ride ended tomorrow?

"If nothing else happened, I could walk away and go, 'damn, we made a great record,' and feel completely content," Summar says. "I can't tell you how pleased I am with how things are going. I feel very fortunate. I'm so proud of this record."