Forgive Phil Leadbetter for feeling a little disorganized. The man - who is a menace on a Dobro (and even has a signature series Gibson named after him) - has had an eventful year to say the least. First, there was the recording and release of his critically-acclaimed solo record "Slide Effects" in March, and then without a rest he was back in the studio to record the latest Wildfire disc ("Rattle of the Chains") with his four bluegrass brethren, just released on Pinecastle Records in late September."I might have to start leaving myself better notes!" he laughs, as he talks about the juggling act that this year has brought with two discs and lots of touring and promotion. 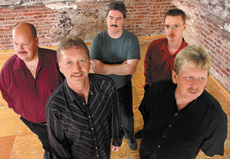 "My record just totally wore me out," he adds. "The record company came to me ... we were wanting to do a Wildfire record, but they told me 'we want you to do a record,' and they gave me a date...then, as soon as mine was done it was like 'wow I'm glad that was over with. Then two days later, it was man we need to get into the studio. I found myself back in the same sound booth and started all over again. This is the first time I've done two major things that I've been this consumed with in a year. I figured it could be done...you just got to do it."

Catching up with Leadbetter at home in late October, he's taking a rare breather before heading to Nashville for the International Bluegrass Music Association Awards show later that week where he received some more news.

He took home Best Dobro Player and Instrumental Album of the Year. Leadbetter also performed his number one single from Slide Effects "California Cottonfields" at the awards show. This is the resonator guitar slinger's sixth year being on the Dobro Player of the Year ballot."For me, it's just good to be nominated," he says. "I figure I've always won anytime I've been on the ballot...that the people think enough to get you on there...that's as good as winning."Joining Leadbetter in Wildfire are a bunch of finely tuned veteran pickers: guitarist/vocalist Robert Hale, mandolin player/vocalist Darrell Webb, upright bass player Curt Chapman, and banjoist Barry Crabtree.

The 5 members have more than 100 years of playing experience.

Leadbetter, Hale, Webb, and Chapman are all veterans of the bluegrass and country industry - having played in numerous bands over the years. One of the major ties that bind is that they have all been part of JD Crowe & the New South. Leadbetter and Chapman even earned Grammy nominations in the best bluegrass release category for their participation in the Crowe ' album "Flashback."

When these five pickers met and decided to form a new band five years ago, the first thing Leadbetter knew they had to do was separate themselves from JD Crowe and the New South's sound.

"When we started the band five years ago, most of us except for one at the time (Crabtree), had worked for JD Crowe and the New South," he explains. "At the time we all left Crowe's band, I knew that we were going to have to sound different than we sounded with him. I didn't want people to go, 'that's just JD Crowe with another banjo player, which I laughed at an article a couple of years ago that said Wildfire is JD Crowe and the New South and I thought 'these people have not heard us because we tried real hard to hang a hard left and be totally different because that's what I felt you need to do to succeed...to have a different sound."

Part of achieving that sound that is different is having a variety of influences and listening to a wide range of music - something Leadbetter says many bluegrass purists don't do, and so it shows in the originality of their music."There are so many in bluegrass...many of my friends are in bluegrass, and they don't listen to anything else," he says. "You ask them: 'Who do you draw from?' and they reply: 'Hey, I got this song from Doyle Lawson, so it must be a Doyle Lawson song...well, maybe, but this might also be a song that was an old rock 'n' roll tune or a country tune, but since they don't listen to anything else, they don't realize where it came from."

"The thing about us is that all the guys in the band listen to a lot of different kinds of music," Leadbetter adds. "We listen to so many things...things like Delbert McClinton and James Taylor and all different kinds of people...Chicago, Hank Williams. I think that's where a lot of our different influences come from. We got all the bluegrass we listen to too...all of us really cut our teeth and grew up on that, but we wanted to expand the box a little bit. You've got to do that."

"Rattle of the Chains," dedicated to the memory and the music of Jimmy Martin, is Wildfire's third release on Pinecastle Records, and it continues to expand the box.

The title of the disc comes from a line in the track "I Wouldn't Mind the Shackles" written by country singer Darryl Worley. The band members are all big fans of Worley's songwriting. "Rattle of the Chains" continues to show that these bluegrass boys are for real. They are constantly evolving and developing their own, different sound, which mixes tempo and adds some non-traditional bluegrass instrumentation.

"Rattle of the Chains" was produced by Leadbetter's friend Scott Vestal, whom he describes as "one of the best banjo players in the world." Vestal recently set up a new home studio, and that's where Leadbetter recorded his solo disc.

After hearing the results, he knew that Vestal's studio was also where the next Wildfire record had to be recorded.

"I was one of the first people to do one down there just as he was just getting up and going," says Leadbetter. "I played mine (record) for all the guys in the band and told them this is the sound we need, and everyone agreed that it was time to step up and go to a different place. When we went to Scott's not only did we get a great studio, we also got a guy that is a musical genius along with being an engineer. It was good getting in and having his input on our project and having an extra set of ears."

While the band searched out some of Nashville's best writers to contribute to the dozen songs, they also searched inward, getting three contributions from Hale.

For his part, Hale believes this batch of songs is the best that they have recorded to date. Hale says that he had them all in mind for the album, prior to entering the studio; especially "In Our Hearts," which he wrote for his late father, who passed away in 2000. Despite these compositions, the humble guitarist still doesn't consider himself a songsmith.

"I have the utmost respect for songwriters and as much as I would love to be able to sit down and write enough songs to put on a CD, I always tell people that I'm not really a songwriter. I'm just a guy that has written some songs," Hale says. "I would like to get more involved in that area of the industry, but for now I just want to do the best songs that we can find whether I wrote them or someone else did."

So, for "Rattle of the Chains," Wildfire turned to the likes of Tom T. Hall ("Ballad of Forty Dollars"), Harley Allen ("All in God's Plan") and Jerry Salley ("The Blame").

When it comes time to search for the right mix of songs, Leadbetter feels that it's important today to look for lyrics that are more modern, which helps Wildfire reach a younger audience that can't relate to some of the older, archetypical themes of bluegrass music."There are a lot of young people coming into this, and you have to do stuff that people can relate to a little bit," he says. "People nowadays really can't relate a whole lot to living in a log cabin on a hill. So, we are trying to find things that relate a little more to modern day life, but have bluegrass instruments to it. We do allow for different things with the old sound. That kind of thing works if you look at the success of 'O Brother, Where Art Thou? ' there is still people that want to hear that kind of stuff."It's just like Alison Krauss," Leadbetter continues. "There is a lot more bluegrass fans because of Alison Krauss. She has won a lot of people over to this music. That is a lot of people that couldn't have been won over by Bill Monroe. The same thing that Garth Brooks for all that so many have said about him has warmed so many people over to country music that wouldn't have given Merle Haggard a listen until they heard Garth Brooks or someone like that."

Achieving the right balance between keeping to the traditions of Monroe, Flatt and Scruggs, while adding some newgrass elements that will expand your fan base, is a challenge, but one that Leadbetter feels is beneficial both to the traditionalists and the modernists in his genre.

"I think it's mutual," he says. "Some of the newer music that stretches the edges a little bit helps everybody."

Leadbetter also thinks that it helps to have a theme to your record - something that has taken him a while to realize. "I think you have to have a theme," he says. "I used to not understand this when I was first starting out when someone would say, 'what's the theme of your record?' I didn't know what that meant...it didn't make any sense. But, a theme can be identified in so many ways. The way I look at theme...one of the most important things in CDs is song placement. I've always been really good at this, and the record company has been good with this...finding where songs from the first track to the last it almost seems like you are at a play or something, scene after scene...that all the songs seem to flow into another."

Whether solo, or with Wildfire, Leadbetter just wants to continue building a fan base and play music.

"You have to find your crowd and build on that," Leadbetter concludes. "My point has always been that people like vanilla, and people like chocolate, and people like Fords, and people like Chevys, and you ain't going to get a Chevy guy to buy a Ford. So, the old-timers will be hard to convert, but I'm more into bringing these new people in that don't have a big bluegrass collection, and they want to come to our table and start their collection off...that's what I want."