"All I can say is, to keep creating something with this type of music, you have to take it out of the box," advises Brian Setzer. "It's fine and dandy to play it and learn it just the way (the original artists) did it, but don't be afraid to take liberties with this music. Try and put some of yourself into it. That's the way you'll be able to create something new with it." 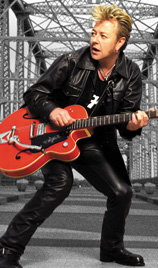 The comment neatly sums up the philosophy behind Setzer's latest Surfdog album "Rockabilly Riot! Volume One - A Tribute to Sun Records." Latching on to the venerated Sun catalog of the '50's, the 46-year-old singer/guitarist has transformed 23 songs - classic hits mixed with cult favorite obscurities - into high-octane modern rockabilly with a retro feel. "My intention," he explains from his California home, "besides to have fun, was to try and get it out so young people could hear it. I was playing (Billy Lee Riley's) 'Red Hot,' and my son and his five buddies, who are like 18, 19, ran into the room and said, 'This is great! What is this?' 'It's rockabilly music, and the song is called "Red Hot."' They said, 'Play it again!' By the end of the day, everyone wanted a tape of it. So, that's what inspired me to do this record. I mean, young people do love this music. It's timeless. But, where are they going to hear it?"

It's a strong point. As a genre, rockabilly's post-Elvis profile has seldom been lower in the United States. Many labels that produced fresh bass-slappin' sides during the '90's, are now out of business. Veteran performers are dying off, and new acts simply aren't emerging on the national scene. Further, for every rockabilly festival staged here, there are 10 held overseas.

Through it all, Setzer has emerged as America's lone commercially viable rockabilly. Asked how that happened, the New York native laughs, "I don't know. I can't give you why. I know there's a lot of people pissed off about it. I'm not God's gift to rockabilly. I mean there's great players out there and great musicians, and some of them deserve a lot more than they've gotten."

"I think if I can say without sounding like I had it all together, with the Stray Cats at least, we really took the music somewhere else. First of all, we wrote our own songs that were good songs. That's a real weak point in modern classics if you do rockabilly or blues. The songwriting has never really stepped forward from the '50's. I was writing some songs. We weren't afraid to mix some crazy styles into the standard rockabilly look. We also took a lot of different musical influences that were part of that era. We had a little punk edge to us - we were full of piss and vinegar. So, we kind of had all the ingredients there. And maybe other bands just didn't have enough of themselves. They have not added their own original stamp to it."

Listeners might assume that all the tunes on "Rockabilly Riot" had been part of Setzer's repertoire since the late-'70's/early '80's Stray Cat days.

"No, no," corrects Setzer. "I probably played - with and without the Stray Cats - about half of those songs. But there were definitely some that I had heard and not played and some that I had never heard at all. I've been playing (Warren Smith's) "Rock 'n' Roll Ruby" for a while. (Riley's) 'Flying Saucers Rock 'n' Roll,' 'Red Hot,' (Carl Perkins') 'Boppin' The Blues,' those are the ones that are the real staples."

"I basically sat down for a month, with all the Sun stuff I could find and just picked out my favorites. I didn't think that they were indicative of '54 to '57, although I tried to stay within that period. You had to pick something like (Perkins') 'Blue Suede Shoes' because it's the flagship of the Sun label, but then I wanted to dig down and find something like (Dean Beard's) 'Rakin' and Scrapin',' and I just think it's a real cool song."

Each song presented it's own particular challenge. "On this record, I put a metronome up to all the songs, and I tried to really keep it true to the original tempos," recalls Setzer. "It is hard to play 'Blue Suede Shoes.' I know everyone has heard it 10 million times, and that makes it even harder to play it, but there's a very laid back tempo on that. I was surprised at how slow it really was."

"The biggest challenge on this record for me was 'Get Rhythm.' I don't know why. Elvis is not so difficult as Johnny Cash because his voice is so distinctive. If you try to copy Johnny Cash, it's just going to sound dumb. I had to pretend I never heard Johnny Cash when I approached that song. I just kind of sang it my way, like I was trying to tell the story he wrote...the way I would tell it to someone."

Perhaps the biggest obstacle was presented by "Peroxide Blonde in a Hopped Up Model Ford." Originally recorded by "Jumpin'" Gene Simmons - whose "Haunted House" was a 1964 smash - it only survived on compilations as an incomplete demo.

Contacted at his home in Golden, Miss., Simmons remembers, "I wrote the song when I was 18, 19 years old at Sun Records. Since then, Sun has released it on various albums over in Europe. I had a complete song when I recorded it. But see, it never was released, and it lay on the shelf back there with 20-something other songs. So, somewhere along the way in mixing that tape down, someone must have broke the tape and didn't try to put it back together."

When Setzer asked Simmons for the complete lyrics, the veteran rockabilly simply couldn't oblige because throughout the ensuing decades, he'd never had reason to sing it.

However, Simmons - who co-wrote Tim McGraw's signature hit "Indian Outlaw" - offered an alterative. "I said, 'Brian, I don't know whether I can get back in the mood to write that song's missing first verse or not. Why don't you just write the first verse, and we'll share the song?"' He said, 'Well, I'll sure give it a try.' A few days later, he sent me a copy of what he wrote and I said, 'Man, that's cool. That's different.'"

The delighted Simmons was even invited to Nashville to see Setzer record the song and ended up singing harmony on the catchy street-racing chorus.

Once upon a time, appropriate setting for all this high-spirited music was the Sun studios were in Memphis, but it didn't happen. "I wanted to go back to Sun," says an earnest Setzer. "Unfortunately, most of the gear is gone from Sun. The way I take it now, it's almost like a tourist destination. So, it would have been pretty difficult to have brought all the gear into Sun to make it like it was in the '50's."

"All the guys that I wanted to use - the producer and everyone - lived in Nashville anyway. I really wanted to use all the old gear with the tubes, microphones, old guitar and amplifiers, all that stuff. Even the bass had gut strings, and the drums had calfskin heads. Everything was like it was back in the '50's. All the gear that I wanted - old guitars, anything I wanted - it was all in Nashville. So, it kind of made sense to just move it over there."

On guitar, Setzer paid homage to the great Sun guitarists á la Scotty Moore and Roland Janes, while asserting his own style. "I didn't want to take the guitar solos down note-for-note, but more or less use them as a map, and keep all the hooks from the guitar playing, and let myself come through."

Asked if the same method held true for his rhythm section, Setzer chuckles, "No. I didn't give them that type of luxury. Those drum parts were so integral to that original rockabilly. People don't play that anymore. So, Bernie Dresel added little different things than they would, but a lot of those original drum fills, he kept all those. Mark Winchester on the bass, same thing. So, it was kind of like a tip of the hat to the original musicians. Mark told me that (Elvis Presley's bassist) Bill Black only played on the A and the D strings. He never used the bottom E or the low G - always in the middle there. He told me that, but I didn't want to make Mark play like that. I just thought that he should hear it the way he does."

Setzer and crew sound like Billy Riley's Little Green Men on steroids. Musically, they swagger defiantly and execute the hot bop with enviable rhythmic command. "You could never top an original like a Sun record, but I basically just wanted to do it like they did."

Some archivists may gripe about the changes the singer-guitarist has wrought, but that doesn't worry Setzer. "A lot of people put all that stuff on a pedestal, and they won't touch it. They're afraid to do anything different. But I don't think that's the reason (the original artists) did that. I think they played that stuff out of pure joy, and they're just happy that you're influenced by that. (Presley's original guitarist) Scotty Moore, I'm sure would say that."

A three-time Grammy-winner, the artist also has a new Brian Setzer Orchestra Christmas album due out this fall, "Dig That Crazy Santa Claus."

Setzer's enormously popular big band and seasonal tours keeps him viable. "Yeah, I'm very lucky that I came back around," he modestly admits. "I didn't know I was going to be part of the swing revival. I just wound up on that wave. It was something I've always wanted to try and all of a sudden these bands were popping up - Royal Crown Revue, Big Bad Voodoo Daddy. I was lumped in with that. I just kind of rode that wave, and we're still playing."