The Flatlanders can't wait another 30 years

No one knew at the time, but when The Flatlanders formed more than 30 years ago, they became the world's first supergroup in reverse. Oh sure, plenty of artists rise up from the obscure bands that spawned them and any success they have along the way naturally forces a spotlight on those early efforts. 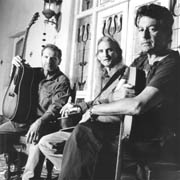 And while those early efforts are often unfairly lionized because of the artist's current success, that assessment most certainly does not apply to The Flatlanders. Joe Ely, Jimmie Dale Gilmore and Butch Hancock were great musicians and songwriters when they teamed up together as The Flatlanders in 1971, and that seminal greatness translated easily to each of their solo careers.

But a funny thing happened on the way to now for The Flatlanders. As more and more time wedged itself between The Flatlanders' dusty past and the present accolades for Ely, Gilmore and Hancock individually, the more mythological The Flatlanders became. The handful of Texas gigs the band played took on legendary status and their almost immediately out of print debut album became prized by collectors as a grail-like object of pursuit.

When the album was re-released in the early '90s, it merely reinforced the impossibly high opinion that had grown up around the album in the previous two decades. It also generated a huge enough response that Ely, Gilmore and Hancock saw the wisdom in resurrecting The Flatlanders in a time that was more sympathetic to their country/rock/Tex-Mex/honky tonk hybrid.

The trio contributed "South Wind of Summer" to "The Horse Whisperer" soundtrack in 1997, played David Letterman's show the following year and appeared in New York's Central Park in 1999, inspiring the New York Times to devote a half page to rave about their show. Two years later, they offered their cover of "Blue Wind Blew" to "Poet," the Townes Van Zandt tribute. It was inevitable that they would eventually move beyond one-off projects and performances.

Although Ely, Gilmore and Hancock had released dozens of albums individually over the course of their 3-decade friendship, 2002's "Now Again" marked the trio's first collaboration in 30 years as The Flatlanders.

Not surprisingly, the chemistry that inspired three decades of Texas legend had not diminished with the passage of time. "Now Again" was widely hailed as one of the best albums of the year in any genre, a huge accomplishment in an age of disposable, blow-dried and manufactured music.

With "Now Again's" phenomenal acceptance came the need to take The Flatlanders out to the people who had been waiting 30 years to see them in person, namely most everyone in the world outside of Texas. The Flatlanders toured the United States and the rest of the world for a grueling 18 months before finally winding down their relentless road activities early in 2003.

But just as unintentionally as the 30-year gap in their history, The Flatlanders regrouped immediately after the "Now Again" jaunt after having decided to take a deserved rest.

"It was one of those things," says guitarist/vocalist Joe Ely from his Texas home. "We never even planned on making another record after the 'Now Again' tour. But we'd gotten this thing that had happened on the road where we were working really good as a band, and I suggested to Butch and Jimmie, 'Let's keep this energy going and just jump right into the studio.' Pretty much the second we got off the road, we went into the studio and stayed in there for five days from morning to night, just sitting there thinking of songs we would love to do."

The Flatlanders and their talented touring band (bassist/vocalist Gary Herman, guitarist/vocalist Robbie Gjersoe and drummer Rafael Gayol) decamped to Ely's Texas studio and brainstormed over existing song selections to record rather than expending any time or energy on the pursuit of newly written songs. As Ely notes, the three of them had already been down that road, and none of them felt the need to repeat it and lose the immediacy of the jolt they had experienced on their recent road circuit.

"It took us about two years to write the other one because we live in different places and our schedules are so haywire because we're all doing separate things," explains Ely. "In the old Flatlanders days, when we were together, between the three of us, there were probably 500 to 600 songs that we could do because each of us had a huge repertoire of songs. So I said, 'Let's just think about songs we already know or that we haven't recorded as The Flatlanders,' which isn't hard to do - 2 albums in 30 years and there's a lot of songs we haven't recorded."

As Ely, Gilmore and Hancock began dredging up the songs of their individual and collective pasts and the band set to work learning them at a furious pace to record, The Flatlanders' new album, "Wheels of Fortune," began to take shape. As the songwriting brain trust went back over their voluminous catalogs, certain choices came easily to each of the participants.

Ely wanted to record one of Gilmore's songs, "You've Got to Go to Sleep Alone," while Gilmore expressed a desire to do Hancock's "Wishin' For You," a song that Ely had covered in 1980 after hearing Gilmore play it in one of his solo sets and, ironically, without ever having heard Hancock perform it. Once the trio started thinking about it, it was hard to pare down the selections to an album's worth of songs.

"There's three of mine (on "Wheels of Fortune") that have never been on a record, and there's two or three of Butch's that he's never recorded, but there's nothing that we wrote for this record," says Ely of the material. "We just have such an immense catalog of songs. I've actually got more things that I've written that have not been recorded than I have on tape. And I'm sure Butch has three times more that he's written and has never recorded. Our whole writing thing is that we don't write for albums. We write for ourselves, and things just happen to find a place on a record. Nothing was written for this record, everything was written for ourselves just as the course of what we do, making an ongoing journal of our lives."

Some of the songwriters' recollections went back to the earliest days of their relationship together and represented longstanding hopes among the friends for specific covers by each of them. A couple of those special suggestions made it onto "Wheels of Fortune."

"Jimmie had always wanted me to do his 'Midnight Train,'" says Ely. "When he first wrote it, he wanted me to do it, and this was the first time I was able to do it. The other one was a song I wrote in 1973, right after we recorded The Flatlanders' debut. I had joined the Ringling Brothers Circus, and I wrote this song called 'Indian Cowboy' that I had never recorded, but Butch has been playing it for years, so I suggested that we put it on there. I love how Butch tells the story, and his voice tells the story better than I do."

The process of making "Wheels of Fortune" might be charitably described as comfortably grueling, as the relaxed manner in which The Flatlanders compiled their material gave way to the compressed time and energy required by the band to learn and play the songs. The sessions lasted day and night, and outside breaks and distractions were eliminated by having food brought into the studio. The results clearly speak for themselves, but Ely doesn't have any qualms about testifying.

Even if The Flatlanders choose not to record again, there will be at least one more album released, and its existence will serve as further proof of the band's miraculous unlikelihood.

Back in 1972 when The Flatlanders sporadically played their Texas environs, a man named Jerry Oliver, owner of a dive Austin club called the One Night and a recording hobbyist, routinely ran reel-to-reel tape of the artists that played at the One Night. Several months ago, Oliver contacted Ely and told him he had a live tape of The Flatlanders from the early '70s.

Ely was dumbfounded to say the least, naturally believing that the band's shows had been so scarce that there couldn't possibly be any tapes of any of them. Oliver produced the tape and offered to sell it to the band; he was trying to raise enough money for an operation to save his failing eyesight. The band eagerly bought the tape, and the mastered results will be available early this year, possibly around the late January release of "Wheels of Fortune."

The 1972 live Flatlanders recording is just another improbable chapter in the life of a band that has defied convention from the outset. Obviously, though, The Flatlanders were no savvy collection of musical manipulators looking to be different for the sake of fashion. Ely says the band began as a group of friends, and that is exactly how it has remained for over 30 years.

"There's a kind of a triangle there," says Ely. "We recognized it when we first met each other. We recognized something in us that made us complete. It had a base and two sides. Each of us was amazed with the others. Butch and Jimmie had never been in the rock and roll world, and I had never met anybody like Butch, who was this great songwriter, or anybody like Jimmie, who was this encyclopedia of country music and who could sing the phone book and make it sound good. We all just hit it off immediately and here it is 35 years later, and we're still making music. Who would have ever thought that?"

The friendship between Ely, Gilmore and Hancock is the constant element in The Flatlanders equation, the reason for the band's longevity and the quality that has attracted so many fans to their camp over the years.

With the joyful archivism of "Wheels of Fortune," a glorious live document of the band in their youthful prime, and another imminent tour (which they may record for a contemporary live album) to promote "Wheels," The Flatlanders, as busy as they may be, are obviously working for the love of their craft. This is one band that won't be punching time clocks anytime soon.

"I know a lot of guys who recorded 30 years ago and went out and don't even talk to each other anymore," says Ely with a laugh. "I went out with the Everly Brothers once, and they travel in different buses. But we've been fortunate to remain friends. When we started on this whole recording project, we made a pact that we were doing this purely as a friendship thing, and if the business ever got in the way or if it got to be work, we would just completely drop it. We don't want to approach it like it's something we have to work at. If it ever turns into a job, we'll do something else."