Kirchen hammers away on his Tele

Bill Kirchen's guitar skills have earned him the nickname Titan of the Telecaster, so - quite naturally - the title track to his new CD, "Hammer Of The Honky-Tonk Gods," is a tribute to a few of his favorite Telecaster players. And without a doubt, Kirchen loves his Telecaster guitar. 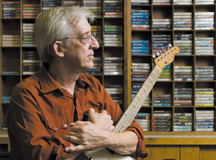 "It's kind of got its own cache for a variety of reasons," says Kirchen, when asked what makes this particular guitar so special. "One, it's a design that's remained virtually unchanged since it was invented in the late '40s/early '50s. So, it's over a half century old, and it's still just about how it started. So, it's one of those things they got right the first time."

"In a way it's kind of the bicycle of guitars, too," he continues. "It's the most efficient way of getting from point A to point B. It was, in its day, an inexpensive guitar. Not a lot of frills; just two pickups, one switch and two knobs. To me, it's got this kind of working man's vibe to it, although it's been used by everybody from Keith Richards to Jimmy Page."

Countless rockers have made Telecaster their axe of choice. But Kirchen's primary attraction to this brand came when he first heard country artists and roots rockers playing them.

"To me - where I got onto it and when I had to have one - was when I started listening to guys like James Burton with Ricky Nelson and Elvis Presley. And Buck Owens and his wonderful guitar player, Don Rich, who I claim as one of my earliest, best influences. And Merle Haggard and his wonderful guitar player, Red Nichols. Those three pickers - and in two cases, their bosses - all played Teles." "To me, it says twang. Not that it doesn't rock and do many other things. To me, that is sort of the quintessential Telecaster sound. It was developed in Southern California honky tonks where that music came up, so it fits in well. Leo Fender supposedly used to get on stage and tweak the new amps he was making while people were trying to play. So, I associate Telecasters with Bakersfield and L.A. country of the '50s and '60s." Kirchen's original music oftentimes points back to his musical heroes. For example, one of the best songs from the new album, "Get A Little Goner," has a whole lot of Owens in it.

"That's the highest praise in my book," responds Kirchen. "It is a hillbilly song for sure. It was written by me and my wife, and it started out with an idea from Sarah Brown, who's this fantastic bass player that I use a lot."

This was not, by the way, the first musical collaboration between Kirchen and his wife Louise.

"She's more of a prolific writer than I am," Kirchen admits. "We have co-written some stuff in the past. We co-wrote a song called 'Girlfriend' off of the 'Raise a Ruckus' album. I've recorded some of her songs. 'Dream World' she wrote, and 'Big Hat, No Cattle,' she wrote....She's helped me out a lot of times on songs where I was floundering. That was her title, 'Womb to the Tomb,' also. She's really ahead of me when it comes to writing songs."

Bill and Louise will have been married 31 years, an eternity by entertainment business standards. And while Kirchen has an encyclopedic knowledge of music, the reasoning behind why his wife has stayed with him this long is one of the mysteries he has yet to figure out.

"That's the only thing I wonder about her," he jokes. "I'm delighted with everything else about her. Except I'm curious as to why she would have stayed married to me. We've been together for over a third of a century. It makes me wonder about her. She's great. She's fabulous. She's been very supportive of my stuff. We've been business partners. She's been my manager at times, and as I say, co-writer. One of the very finest people I know. The finest person I know."

Famed singer/songwriter/producer Nick Lowe appears on Kirchen's new one, and these two unlikely friends have worked together many times over the years. Kirchen has also performed with Lowe's famous crony, Elvis Costello. But both of these musical figures are more closely associated with British new wave and punk movements, not country. Kirchen's associations with Lowe and Costello reveal just how wide his circle of friends reaches.

"I actually met Nick Lowe back when he was in Brinsley Schwarz when I came with Commander Cody to England in the early '70s," Kirchen recalls. "But I didn't really get to know him until I was reacquainted with him by Austin Delone, a wonderful Bay Area singer/songwriter/piano player/guitar player who I played with in The Moonlighters for years."

"When I had a band with Austin, he wrote a letter pitching our songs to Nick. And Nick wrote him back saying: 'Dear hero of mine, Come on over to England, and I'll produce your album.' The whole (Moonlighters) band went over there and made a record that he produced, and I've been friends with him ever since."

"I'm just a huge fan of what he does. I think he's one of the most soulful and smart and funny writers that I've every known," Kirchen continues." I've had the good fortune to make a couple of his records with him. I was on 'Party Of One' and then later, 'Impossible Bird.' He produced one record of ours, The Moonlighters record, and he was gracious enough to play bass on this (new) record."

Kirchen is not surprised to have bonded with these two famous British rock musicians.

"Just like it was with jazz and blues, I think sometimes people from overseas have a unique appreciation of indigenous American music," he theorizes. "They see it better or they see if differently than we do. They sometimes have more affection for it. Just like The Beatles did for old rock and roll and The Stones did for the blues. And Nick's always been a country fan. He was married into the first family of country music, to Johnny Cash's stepdaughter. To June Carter's daughter. He introduced me to Elvis (Costello)."

Since that introduction, Elvis and Kirchen have also played together on and off over the years.

"After Elvis released a country album back in the '80s, I did a BBC radio show with him where I played," he says. "And I've had a chance to play guitar with him a couple more times. The last time was at the Hardly Strictly Bluegrass Festival a couple of months ago in San Francisco. And Elvis borrowed the name of my album and that song, 'Hammer Of The Honky-Tonk Gods,' and he got me and Austin Delone and his rhythm section and called the band Elvis Costello and The Hammer Of The Honky-Tonk Gods. He asked me if he could use the name and I said, 'Absolutely.' He let me sing that song on the show, and we did a lot of just country music on that one; a lot of country and some of his more country-influenced stuff that he wrote. Elvis has always had a deep country catalogue, too."

Country is just one of the many styles Kirchen has mastered. So he would never call himself strictly a country artist.

"I came up through rock and roll," he explains. "I back-door-ed country through folk and bluegrass and eventually - by the late '60s - got into hard, blood and guts, country. I came up as a Bob Dylan/Beatles type of guy."

Kirchen has been making solo albums for many years now, although he is probably best known for his role as the guitarist in Commander Cody and His Lost Planet Airmen.

"That's the same Telecaster that I play today," Kirchen marvels. "I was the guitar player on that song. I got the guitar hook on that record. We didn't write it, I hasten to point out. It was an oldie by the time we got to it. We had the big pop hit of it, though. Timing is everything, I guess. It had been a country record by a couple different people."

Commander Cody's take on the song stood out because it was a little more rock and roll than other recordings that preceded it.

"When I went to learn it," Kirchen recalls, "I tried to learn the guitar part exactly. And I really didn't, as I look back in hindsight. It was originality born out of incompetence. But now I like what I came up with. It's just one of those songs that's got legs on it. I think 10 years after we did it; Asleep At The Wheel recorded it. That song's got a long, long list of people that have roughed up on it, like we did."

Kirchen is far from finished putting his unique stamp onto familiar songs. For instance, his version of "Devil With the Blue Dress," found on the new album, is nothing like the ruckus rock and roll of Mitch Ryder's familiar pop hit. Kirchen's is a much slower, quieter, diabolical thing.

"What I actually did was I went back to the original record by Shorty Long," says Kirchen. "And it's all like that. It's really slow, and it's got the harmony chorus. My version is actually much closer to the original. Mitch Ryder's, of course, that's first place I heard it. I think, actually, Sarah Brown turned me on to the original." "Shorty Long's other big hit was 'Function at the Junction.' He was one of the lesser known Motown artists. He did it ("Devil with the Blue Dress") real greasy. There was a great guitar player on the original. He just won't stop playing. He just rages through the whole song. It's real, real lowdown like that. I was in Australia, and this group called Git - three women from Australia - wanted to make a record with me. I brought some songs to the table, and that was the one they picked. So, we cut it in Australia with them. I wanted to put it on my album. I lifted their vocal parts and my original guitar and vocal, and replaced it (the rhythm section) with our rhythm section of Nick Lowe and Robert Trahern and Austin Delone. Through the miracle of modern recording techniques, I was able to skim off the girls and put 'em on my record."

Although Kirchen has great fun rearranging and performing songs, his first and most abiding love is for that Telecaster guitar of his, which brings us back around to the title song of his new CD.

"I wanted to write a song about the Telecaster," says Kirchen. "I actually thought of that song when I was driving down to hear Redd Volkaert, who - for my money - is one of the most amazing players on the planet. I started writing that song about the Telecaster and the people who play it. So I name check all my favorite players who play it. I think the song is fun even if you don't know what the hell the dang Telecaster is."