Monday, April 3, 2017 – RaeLynn debuts at the number one spot on the Billboard Top Country Albums chart for the week ending April 15 with her first full-length release, "WildHorse." Sam Hunt again held the top spot on the Hot Country Songs chart with "Body Like a Back Road."

Keith Urban was second on the albums chart with "Ripcord," falling from the top spot. Chris Stapleton was third with "Traveller," one ahead of Florida Georgia Line's "Dig Your Roots." Brett Young closed out the top five with his self-titled debut.

On the songs chart, Hunt was followed by the same pack as last week. Jon Pardi was again second with "Dirt on My Boots," Young third with "In Case You Didn't Know"; newcomer Luke Combs fourth with "Hurricane" and Luke Bryan fifth with "Fast."

Alison Krauss led the Bluegrass Albums chart again with "Windy City." Marty Stuart And His Fabulous Superlatives" were second with "Way Out West," one ahead of Bradley Walker's "Call Me Old-fashioned." Nitty Gritty Dirt Band held fourth with "Circlin' Back: Celebrating 50 Years, Live at the Ryman Auditorium, TN." The Dead South debuted in fifth with "Illusion & Doubt." 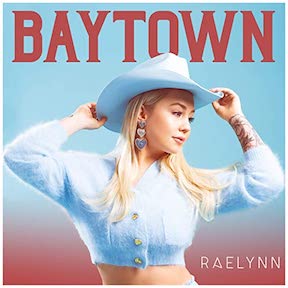 Country music should put in the by-laws that there must always be heirs to Dolly on the charts. We've seen plenty of ladies who overdo the sex appeal or come across a little aloof (would Shania really have a beer with you?). The world needs women who are spiritual and free-spirits, who remember when folks sang with twang. To that end, we present RaeLynn, now on Florida Georgia Line's label. For all her songwriting strength ("Love Triangle" was a high mark) and ...
WildHorse

Someone needs to inform karma that Raelynn is not getting what she deserves. It takes a lot of work to mess this equation up: national TV exposure (from "The Voice"), a monster hit (2014's "God Made Girls") and famous friends who've practically adopted you (like Blake Shelton). This is all atop her twangy Texan charm and very capable singer/songwriter chops. But somehow Raelynn's overseers made headshaking decisions. Last time out, they strategically released two ...
Me

Call it the Kellie Pickler model of success. Take one perky blonde persona, throw in some aw-shucks Southern charm and top it off with a throwback singing style to charm your way onto a game show. It sure worked well for Racheal Lynn Woodward. While the native Texan -- then in her teens and now 20 - didn't win season two of The Voice, she certainly warmed her way into Blake Shelton's heart. He put her on his smash "Boys Round Here" and wife Miranda Lambert took her on tour. ...