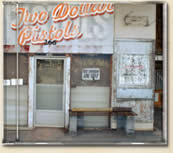 When listening to a Two Dollar Pistols disc, you might find yourself looking at the liner notes to see the songwriters' list. But Two Dollar's John Howie Jr. pens classic-sounding country tunes - not that you won't hear other influences - that often seem to call for scratches and pops from a 45 hissing behind them.

After being with Yep Roc since 1998's live "Step Right Up," the Pistols are putting out their first album in 3 years on Howie's new label. That's not all that's new. He's married and a new father, but don't worry: the changes haven't stopped the sad songs that flow from Howie. "Tortured mind let me get some sleep tonight," Howie sings, and you just know it ain't gonna happen.

Southern Culture on the Skids' Rick Miller lends a smooth, light touch as producer. Miller's SCOTS accomplice Mary Huff provides soulful harmony vocals on the delightful "Stranger Things Have Happened" while Tres Chicas's Lynn Blakely and Tonya Lamm contribute backing vocals to several songs, including the standout "Anyone Else But Me." Clyde Mattocks' pedal steel hits in all the right spots, and the other Pistols, especially lead guitarist/multi-instrumentalist Scott McCall, make Howie's words and big voice even more effective. Memorable songs abound on an album that'll stick with you today and tomorrow.