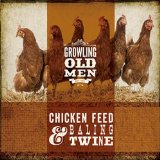 Growling Old Men - John Lowell and Ben Winship - impress with their laid-back Northwest acoustic stylings. The self-produced fourth disc from this Idaho duo (accompanied only by David Thompson on bass and harmonies) is an 11-song collection of largely concert favorites that never found their way to an album as well as a smattering of new material.

Well, it's about time some of the favorites finally were cut. Several traditional numbers, including the acoustic Elzik's Farewell and the opening tune Lazy John tuck in neatly next to songs from Americana artists like Jeffrey Foucault, Norman Blake, Cheryl Wheeler and an especially intense read of Dirk Powell's Waterbound.

There's incredibly clean, tight interplay between Lowell's guitar and Winship's mandolin throughout the album, especially as they update the old-timey Wabash Blues. And you can almost see the wry smile and wink underlying their four self-penned numbers, particularly Toolshed and My Name's Mudd. Yet there's a serious side as Lowell takes a lonesome ride through the western wilderness with his wistful ode to the weathered, gray cowboy known only as Wild Jack.

Based on their music, Lowell and Winship don't appear to be particularly old or grouchy. That's a good thing.