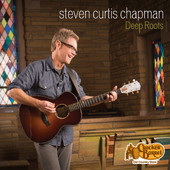 Steven Curtis Chapman is a well known and respected composer and artist in the contemporary Christian music field, with a career that includes five Grammys and record setting 56 awards. In part, his latest is a celebration of traditional hymns including standards like Blessed Assurance, Rock of Ages and How Great Thou Art.

Blessed Assurance begins with minimal accompaniment before blossoming into a full acoustical treatment, including a resophonic guitar. How Great Thou Art, on the other hand, has a sense of urgency with a background of a rapid guitar finger roll. This arrangement pairs Chapman with daughter-in-law Jillian Edwards Chapman, trading leads while harmonizing on some parts. It makes an interesting new take on a staid old hymn.

Included is a song more usually associated with bluegrass or older country music. Life's Railway To Heaven is lighthearted, including some spoken comments from Chapman and vocals by his father and brother, Herb Chapman Sr. and Jr. Both prove to be capable singers and this is a very enjoyable remake of this old song. They also sing together on a beautiful version of Bill Gaither's He Touched Me. Ricky Skaggs joins Chapman on What A Friend We Have In Jesus. The words and melodies of these songs will be familiar but Chapman has added some twists to the musical arrangements that brings new life to these so often-heard songs.

He enlisted the help of some top musicians. While he plays guitar and banjo, Rob Ickes joins on Dobro as well as Dan Dugmore on Dobro and steel guitar. Bryan Sutton adds guitar and banjo while Brent Milligan (who co-produced) plays bass, cello and baritone guitar. Gordon Mote, long associated with the Gaither Family Reunion series, plays piano.

Chapman also gives us songs from his repertoire, reaching back to 1999 for Be Still And Know, performed with his son, Caleb, and to the '80s for My Redeemer Is Faithful and True, Hiding Place and His Eyes.

The CD closes with Cinderella. Although nominated for a Dove award, it isn't a religious song in the usual sense. While the tune is enchanting and lyrics are thoughful, it's the story behind the song that will touch your heart, a reminder to too many of us who lead lives that are too busy.

"Deep Roots" will be enjoyed by anyone who has any love at all for gospel music.