Reviewed by Jeffrey B. Remz 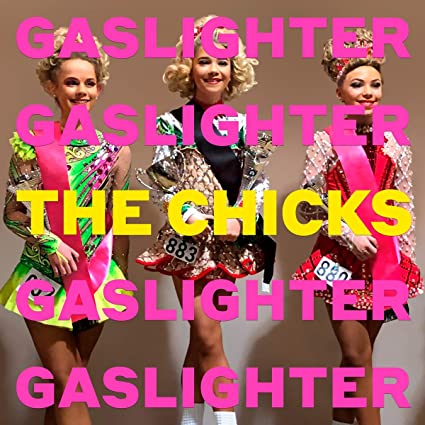 Much has changed for The Chicks since their last studio release, "Taking the Long Way," some 14 years ago. Rebranding for one. No more Dixie Chicks, thanks to their reaction to the discussion over racial issues in the U.S. following the killing of George Floyd. "Dixie" was no longer the right look.

And then there's the music and the end of a marriage, an overriding theme throughout the highly personal and emotional "Gaslighter."

The change also crept into the music of The Chicks. Lead singer Natalie Maines, banjo player Emily Strayer and fiddle player Martie Erwin veered more and more away from the country and three-part harmonies that were their stock in trade and brought them to the dance. The California sunkissed harmonies are ultra prominent on the crack lead-off title track with a crack drumming forging the pace. But more often than not there's more of a non-commercial pop sheen ("Julianna Calm Down") to the mid-tempo and sometimes (and a bit too often) slower pacing of many of the dozen songs, perhaps due in large part to producer Jack Antonoff, a member of .fun and Bleachers.

Maines is the focal point in more ways than one. Her voice sounds about as supple as ever, raw, emotional, angry ("Gaslighter" among others where Maines calls her ex- a liar) and sad, but resigned ("Hope It's Something Good"). The album was originally supposed to be a set of covers, but Maines was inspired to write about the end of her marriage to Adrian Pasdar. On the musically unexciting "Tights on My Boat," Maines gives the kiss off "you're gonna get what you got comin'." There's a whole lot more of where that came from ("Sleep at Night," "My Best Friend's Weddings"). This kind of change was awfully hard. Maines also goes tender on a message to her son on the beautifully delivered "Young Man."

It's clear that "Gaslighter" provides a vehicle for Maines to unleash her innermost emotions regarding her marriage. It was not pretty with Maines defiantly angry on the lead-off title track. By the end, the anger has turned into disappointment, only to want to go her own way on "Set Me Free."

Strayer still peers through the typically soft, restrained undertones of the songs on her banjo, but that's a rarity. The banjo is perhaps most prominent during the sad "Hope It's Something Good." Erwin's fiddle playing tends to fill musical spaces and is more subtle throughout, except on "Everybody Loves You."

For The Chicks, there is no going back. They've long since abandoned country emotionally and with "Gaslighter," they've left a few other things behind as well as they enter a new phase. Life may not always be pretty for The Chicks, but yet again they show their heart and mettle to forge ahead.