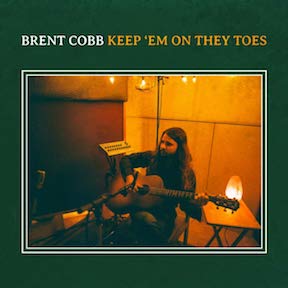 Not sure we've seen the term 'minimalist country' but that's a fair description for Brent Cobb's artistry, especially on "Keep 'Em On They Toes," one that he prefers to call 'quiet and conversational.' His fourth album is certainly reflective as Cobb and his family moved back to his native Georgia a few years ago. The locale seems to suit him, and it's at the heart of these 10 songs where he chooses to write about his thoughts and feelings as well as his observations on the world rather than the people and places he sang about on his previous efforts. He clearly has classic records of Roger Miller, Willie Nelson and Jerry Lee Lewis in mind.

The musical sparseness leaves one little choice but to focus on his lyrics, which as the use of 'they' in the title track suggests, make a conscious effort to relate to country folks even though the words themselves may often be counter to the way many country types feel about today's issues. Here's a verse – "The best thing you can do/When the ignorance shows/Is walk on to your own beat/Keep 'em on they toes." Clearly, as one views titles such as "Shut Up and Sing," "Soapbox" and "The World Is Ending," Cobb is championing independence. He doesn't come off as preachy, rather as someone who values a simpler time in this increasingly fast-paced world. He uses some clever, subtle techniques such as the clashing harmonica and fiddle in "Shut Up and Sing" to represent opposing views.

"Good Times and Good Love," co-written with the piano playing Luke Bryan, celebrates living in the moment. There's dry humor, from a dad's perspective in "Sometimes I'm a Clown," recollection of a psychedelic trip in "This Side of the River" and his most independent statement of all in the shuffle "Dust Under My Rug." A clear standout is the animated "Soap Box," co-written with his dad, Patrick Cobb, with harmony from Nikki Lane, contributing to the casual, carefree stance. "When You Go" and "Little Stuff" are paeons to the down-home life while "The World Is Ending" is an older (not a pandemic related) song about the when the Mayan calendar ran out in 2012. The spirit of the album is like having a relaxed, meaningful conversation with a good friend.