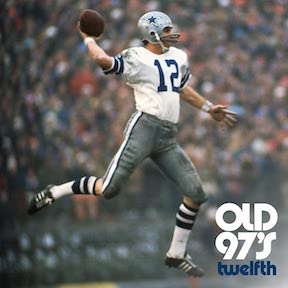 To illustrate its 12th album - appropriately titled "Twelfth"- Old 97's put a picture of Dallas Cowboys star quarterback Roger Staubach on the cover, where he can be seen throwing a pass wearing his number 12 jersey. Since the band is originally from Dallas, it all fits together quite nicely. The album includes all the elements we love about Old 97's: a whole lot of honesty and self-deprecating humor. While country music is a part of what the band does, it would be a stretch to call the group a country band. There"s just too much amped up electric guitar for that descriptor to fit. With that said, though, Old 97's create wonderful country-ish rock and roll.

While there's much to love here, "Belmont Hotel," which rolls to a waltz time rhythm, smartly compares a restored romance to old hotels, and may be the record's shining moment. Like these revived hotels, which have gone from the haunts of vagrants, to respectable temporary stays, this man's relationship is back on the up-and-up. Or as the lyric puts it, "better than brand new."

The album opens with "The Dropouts," which describes the questionable 'career choices' of many musicians. These ones chose getting high and creating music, over studying for a more stable and legitimate career. "This House Got Ghosts" is the song of a spurned lover who vows to haunt his ex for letting him go. We'd all like to think we haunt our exes, even though that wish may never come true. We can at least dream, though.

Rhett Miller sings most of these songs, and it's his voice and perspective that drives the band. Although he's relatively recently given up drinking, alcohol still plays a large role in the group"s music. For instance, he tells a girl he loves her more than beer during "I Like You Better." For some reason, hardwood floors are also mentioned more than a few times in the lyrics.

"I've got the bloodsucker blues/But I can't get a bite," Miller complains during the two-stepping "Bottle Rocket Baby," a song warning a girl that he's trouble, so stay away. "I'll burn your fingers/And I'll make you cry," he tells her flatly. Yes, Old 97's can still be trouble, all these albums later. Ah, but they're also so much fun, even 12 albums in.