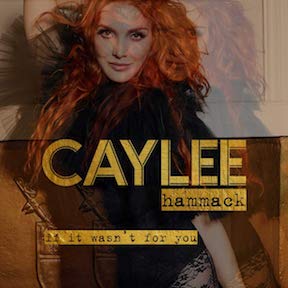 Caylee Hammack has a strong voice and sings with great authority throughout. Although she's credited as a writer on all its tracks, the results are ultimately a mixed bag. The release opens with "Just Friends," which is no better than a Miranda Lambert knock-off. It sounds like something Lambert would write about, only Miranda would have written it better. "Redhead" features fellow ginger, Reba, but it's only an okay pop song, at best. "Looking for a Lighter" is the first truly stellar song on the album. Sung over a gentle, mostly acoustic arrangement, this is also the first instance that brings out Hammack's sweet vocal vibrato. Although this lyric applies many smoking-related clichés ("Your love is such a drag"), Hammack sells these familiar phrases well to create a sincerely moving song.

If only everything was as good as "Looking For a Lighter," though. "Preciatcha" (which is novel way of saying 'I appreciate ya'), sounds more like a Katy Perry mellow tune, more so than anything distinctly country. "Small Town Hypocrite," another softie where Hammack sings again with Parton-esque sweetness, was released before the full-length came out, and promised more than the complete album delivers. Applying a lot of acoustic instrumentation, this song's lyric - about small-town hypocrisy - is one also plays out like something Lambert might write and sing, but this time up to her high standards. "Gold" is even more sparse, featuring just acoustic guitar and Hammack's voice. Hammack conjures up Patty Griffin. She goes from a quiet reflection to full-on belting, all within the same song. It's, in a word, powerful.

It sounds as though Hammack is trying to serve mainstream country radio and her artistic muse, at the same time. But we all know you cannot serve two masters. Where it's good, this release is really good, but where it's so-so, well, you best just ignore those parts.