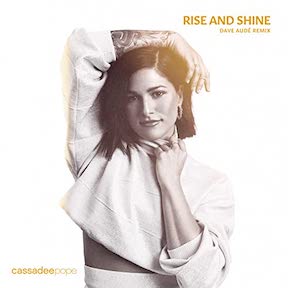 By all accounts, Cassadee Pope has led a glitzy life. She was the first female winner of "The Voice." She then had a record deal at 17, a spot on a sold-out tour with Fall Out Boy at 18 and eventually garnered a Grammy nomination.

Her discography of country-pop is generally glitzy, too. Well, not this time. "Rise and Shine" is a stripped-down acoustic effort by the 30-year-old singer that is thoughtfully introspective without being brooding or too deliberate.

Pope co-wrote and produced each track. The release shifts gears smoothly and with diversity in the first half as the first four songs ride a cohesive sonic wave of Pope's silky soprano accompanying deft acoustic guitar. The sexy "Counting On The Weather" is followed by a pop-laced cover of her former band Hey Monday's "Hangover." The most country effort is "California Dreaming" a fitting duet with boyfriend and Nashville TV series alum Sam Palladio. His high tenor is a perfect complement to Pope.

Pope's belt range is huge, but save for the title track, she does not exercise it. Pope admitted the production is deliberately sparse and apt for the times. "There's not a lot of distraction from the melody, and in the world today, there aren't many distractions from ourselves."

The album draws on her past experiences within the music industry, especially a split from her label, a public relationship drama and friendships as inspirations. The former frontwoman of a pop-punk band has shown that the transition to a seemingly disparate genre is not only possible, but believable.