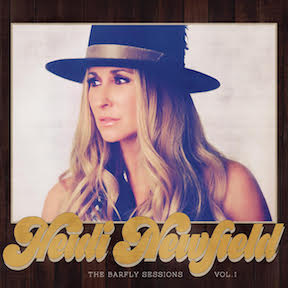 There are many encouraged by Tanya Tucker's recent comeback album and rightfully so. She brought a rocker's reckless approach to creating country music back in the '70s. However, Tucker has naturally slowed down some since her youthful beginnings. Therefore, if you're seeking music that matches Tucker's original fiery recordings, look no further than Heidi Newfield, who has just released the super energetic "The Barfly Sessions."

Newfield's name may still not be a familiar one to many, even though her ode to Johnny Cash and June Carter"s trial-filled marriage, "Johnny & June," went all the way to number 11 back in 2008. She was also a road warrior with the Trick Pony trio from 1996 to 2006.

This title track, "Barfly" is by no means some sad head-on-the-bar tearjerker. Rather, it has a thumping country-rock groove. The acoustic guitar/harmonica-colored "Wrong Side Of The Bottle," which bears a strong similarity - both melodically and rhythmically - to Alan Jackson's "Don"t Rock the Jukebox," is much barfly-ier, to coin a phrase. It rolls along nicely and includes plenty of traditional steel guitar.

In addition to country and rock, blues is big in Newfield's musical world. She sings about blues being her job on "The Blues Is My Business," while the partially acoustic "Love Blind" includes plenty of blues harmonica. The album's best line comes from the country-history-recounting "Whitley's Tombstone," when Newfield admits, "I'm as cold as the marble on Whitley's tombstone." The country styles range from the softness of "When Heaven Falls," to "I Could Fall For You," which is so rollicking, you can easily imagine Dwight Yoakam revving it up.

If you love old Tucker, as well as Ashley McBryde's modern outlaw style, there's no reason why you won't enjoy being a barfly in Heidi Newfield's new joint. Much like Tucker before her, Newfield has energy to spare.