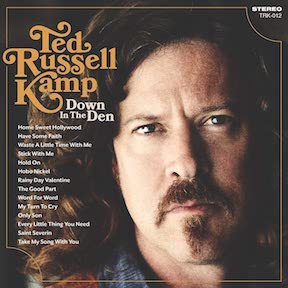 Ted Russell Kamp is one of the hardest working singer/songwriter/musicians around. While keeping busy with his steady gig as bass player for Shooter Jennings, he also found time to contribute bass to Tanya Tucker"s 2020 Grammy winning "While I"m Living." With "Down in the Den," Kamp delivers his 12th solo album. Jennings is on hand to duet with Kamp on the opening country rocker "Home Sweet Hollywood" in which the pair trade verses on life in the show biz capital ("I got a friend of a friend says he likes the band and if I sign on the dotted line/He's gonna put my songs in a TV show or maybe even Batman 9").

Kamp further demonstrates his multi-instrumental skills contributing Dobro to the duets with collaborators Kirsten Proffitt ("Take My Song With You") and Gordy Quist ("Hold On"). The strongest country songs are "My Turn to Cry" (co-written with Penni Dale and Andi Zak) that recalls Rodney Crowell and features Dave Berzanski on pedal steel, and "Stick With Me" (co-written with Dylan Altmann) featuring harmony vocals by Levi Duren.

Produced by Kamp and recorded mostly at his Los Angeles studio known as "The Den," this is a fully satisfying 14-track effort that gives the esteemed but still somewhat under appreciated sideman some well deserved time out front.