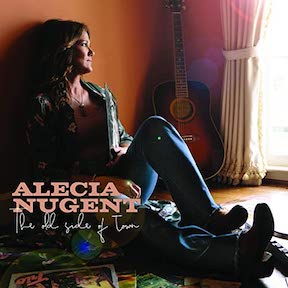 From the first notes of Alecia Nugent's "The Old Side of Town," the opener and album title track, her classic country, '80s sound is an immediate draw. Her presence is authentic and commanding. She knows this turf very well, but it's rather remarkable because the IBMA and SPBGMA award-winner is returning to the scene after a 10-year absence, shunning her real comfort zone in favor of classic country.

Working with Keith Stegall and elite players such as Paul Franklin, Stuart Duncan and Dan Dugmore, Nugent showcases her endearing vocals throughout the nine songs here with a bonus nod to her bluegrass following with that a reprised "They Don't Make 'Em Like Daddy Anymore" done, yes, in bluegrass fashion.

That song of fond remembrance and the title track written by Tom T. Hall infuse the first portion of the album in a melancholic beautiful way, but she picks it up in places too, notably on the two-stepping "Tell Fort Worth I Said Hello" and the honky tonker "Too Bad You're No Good." These are classic country tales and Erin Enderlin and Larry Cordle-penned "I Might Have One Too" is one of the best. While the title may imply a drinking song, instead It tells of a philandering husband confessing his sins and the narrator saying she might have a reason (after his confession) to move on to someone new, too.

As strong as Nugent is, the overall tone of the album is sad in a relatable way. "Way Too Young For Wings" will certainly strike emotional chords for anyone who has lost someone in their life way too early. Heartache takes center stage on several, certainly on Brandy Clark's "The Other Woman.". She gets more lighthearted on "I Thought He'd Never Leave" but becomes most vulnerable on "Sad Song." These themes speak directly to her 10-year absence where she lost her father and grieved with her daughter over a lost loved one.

Yet, this expertly crafted album exudes warmth like few others. For its combination of songwriting, vocal performance, and stellar musicianship, this is one of country's best albums of the year.