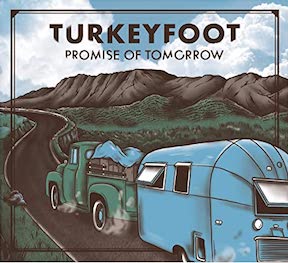 Colorado has long been one of the biggest breeding grounds for a new generation of acoustic pickers, especially those gravitating toward bluegrass music. Whether it's the altitude, legalized marijuana or the 400-plus craft breweries located throughout Colorado, there is something about the Centennial State that produces top-notch acoustic/bluegrass talent. The latest outfit furthering that notion is Turkeyfoot, a quintet that recently released its debut, "Promise Of Tomorrow."

As it turns out, "Promise Of Tomorrow" is a fitting title – this is an impressive opening salvo from a promising new group.

The members of Turkeyfoot include Jordan Brandenberg (mandolin and lead vocals), Michael Rudolph (bass), Bridger Dunnagan (fiddle), Dave Pailet (guitar) and Alex Koukov (banjo). Although they've only been a complete unit for three years, there is an assuredness here that you don't often find with younger bands.

When it comes to picking prowess, there are no better showcases than the two instrumental tracks. "Snagglehorn Stomp" is a whimsical little tune with a whisp of European folk melody that leaves space for each player to get a piece of the spotlight. You might expect the usual solo segments commonly found in bluegrass tunes, but this one is different. Each player gets a chance to carry the melody without getting flashy. This results in a song that builds a sonic tapestry by weaving instruments in and out of the lead.

The uptempo "Westwater" is more akin to the typical bluegrass breakdown minus lengthy solos. The players' dexterity is the star as the staccato melodies flow at a stiff pace. This isn't easy stuff, but the quintet makes it seem that way.

As good as those instrumental compositions are, the tracks with vocals are the true standouts.

Though not a true concept album, Colorado is theme making appearances throughout. "Girl From Oklahoma," one of the poppier songs, chronicles a woman leaving Oklahoma's red dirt for Colorado's mountains. "Coming Home," the closing track, describes the restorative powers of returning home to what was once, "the home of Comanches brave."

On "In The Mountains," the narrator literally loses his love in the cold winter mountains, while on the next track "The Telluride Waltz," the narrator's love for a Colorado town is stronger than his affinity for human relationships, including one with a woman from Montana. That's true love.