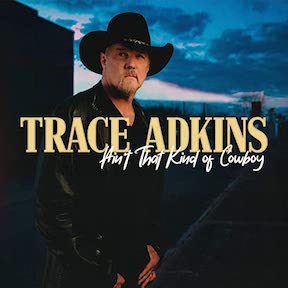 Anybody with staying power in the modern country music landscape must have found a four-leaf clover and a niche. Trace Adkins hearkens back to a time when country stars included more Alpha males. He's got a baritone as deep as an oil well and stands eye-to-eye with quite a few pro basketball players. It's enough presence to show up on screen, and Adkins has had more than one foray into film over the 30-plus years he's been singing for his supper.

Now approaching 60, you wonder if Adkins is going to press with the overt come-ons of past hits like "One Hot Mama" and "Honky Tonk Badonkadonk". The answer is you bet. This five-song EP opens with "Better Off." While the bedroom banter's nothing new for Adkins, the tune's pretty spicy for the writing contribution of Love Junkies Hilary Lindsay and Liz Rose. It's more good fun than raunchy, though, with a catchy energy. The other number aimed more at grown-ups is called "Big," and the listener can imagine the naughty possibilities there. But with tongue-in-cheek, Adkins croons about how he likes large steaks and admires Dolly Parton's big wig.

The balance of the record has a little more to say. For example, the title track tells about a different breed of cowboy that wants to settle down, rather than ride off alone. Church groups could have an interesting discussion about the question raised with "Mind on Fishin" – are you better off daydreaming about catching bass in the pews or talking to the heavens on a fishing boat? Adkins' low vibrato adds a nice counterpoint to whatever the guitars are doing in the higher register – a chef might say it's a nice balance of flavors. Closing tune "Running Into You" gets a little sleepy with its sighing over a love lost. But, on the whole, the old Louisiana Cowboy's has served up a solid short set, along with that signature growl in his tone and wink in his eye.