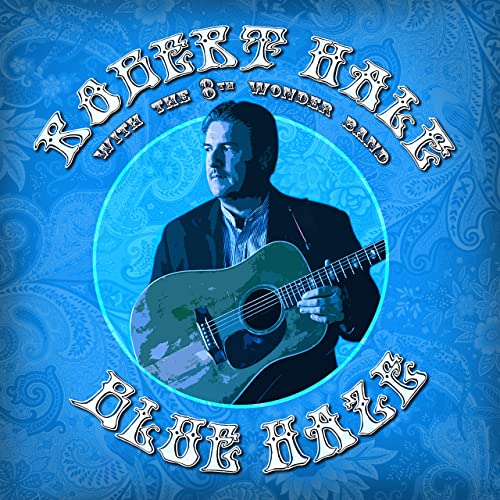 Robert Hale has been on the bluegrass radar more than 20 years, coming to prominence with J. D. Crowe's New South and fronting Wildfire since 2000. A stable member of a frequently changing line-up, his years with Wildfire have been marked by soul-filled lead vocals and quality songwriting contributions. With the group, he also covered a range of popular songwriters from outside the bluegrass realm (James Taylor, Delbert McClinton, The Box Tops,) and his solo release of 2012 "Pure and Simple" featured songs from Gordon Lightfoot and Lynyrd Skynyrd as well as a dramatic take of Stevie Wonder's "Sir Duke."

One isn't surprised to see his latest EP be comprised of covers. "Blue Haze" from Robert Hale & the 8th Wonder Band pulls from a few unexpected places (popular if unremarkable FM rock staples from Eric Clapton ("The Shape You're In") and REO Speedwagon ("Riding the Storm Out") as well as a deep cut from Jim Croce and a couple rock standards. While the song selection isn't terribly notable, for the most part the performances of Hale and his hand-picked group are.

The lead single "Help" serves as the introduction to the EP, but sounds a bit too reverential. Scott Vestal's banjo rolls and Chris Davis' mandolin notes provide the needed bluegrass verve, but Hale's voice isn't showcased terribly well; as one may hope he would, he never really cuts loose.

Stronger are his lively interpretations of Bobby Womack's classic "It's All Over Now" and "House of the Rising Sun." Here Hale's country-blues influences suitably frame bluegrass arrangements; Vestal, the current International Bluegrass Music Association Banjo Player of the Year, pops his notes in rather impressively. Croce's "Rapid Roy (The Stock Car Boy)" retains its Chuck Berry roots filtered through 50 years of bluegrass-flatpicking influences. Not sure "Mr. Bojangles" needs to be recorded in 2020, but Hale's bluegrass interpretation is better than most encountered, and Hale makes "Riding the Storm Out" well-suited to bluegrass.

Reigning IBMA Bassist of the Year Missy Raines and Blue Highway's Shawn Lane (fiddle) round out the suitably named 8th Wonder Band, with Hale handling the guitar parts. A Jimi Hendrix song wouldn't have been out-of-place.

Nothing on "Blue Haze" excites to the degree of the unexpected explosion of country funk that was Hale's take of "Sir Duke." Still, the EP replicates a spectacular bluegrass front-porch jam, as may have been the intention; a relaxed, familiar and contemporary approach to the genre.