Phil Leadbetter and The All Stars of Bluegrass 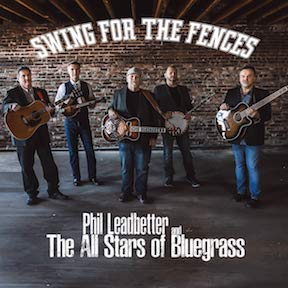 Alan Bibey, award-winning mandolinist with Grasstowne, BlueRidge and others.

Steve Gulley, highly regarded vocalist with a range of groups including Quicksilver, Mountain Heart, Grasstowne, Dale Ann Bradley and his own New Pinnacle.

Robert Hale, well-regarded vocalist with the New South, Wildfire, among others.

An all-star lineup of bluegrass professionals, no matter one's taste.

Exceeding expectations for part-time, side-project, Phil Leadbetter and the All-Stars of Bluegrass have produced a collection of music as durable as it is emotionally-laden. One of Gulley's final projects, this set is wistful, a celebration of music made between friends, its impact sharpened given Gulley's death.

The poignant ballad "Yesterday's Gone," a charged, honest vocal duet between Gulley and his wife Debbie, is one of the album's centerpieces, as is the spiritually inspiring "Ready and Waiting." "Times Are Tough" chooses to focus on fateful positives within trying times.

The title track, utilizing baseball phraseology as metaphor for living one's best life, should find the bluegrass charts, as already have the singles "Ain't No End to this Road," "The Hurtin' When You Go" and "I Wanna Go Back," featuring Steve Wariner. The band's mantra may be revealed in the lead track, sung by Hale: "No matter what direction we go, as long as we're together, it goes on forever — there ain't no end to this road."

The fiery instrumental "Avery Stokes" should receive attention when the next IBMA Instrumental of the Year ballots are completed.

Rodney Crowell's "One Way Rider" — a jam favorite previously closing albums by Johnny Cash, Albert Lee, Ricky Skaggs and The Seldom Scene — also serves as the coda for "Swing For the Fence," a vocal showcase — on successive verses — for each of Gulley, Bibey and Hale.

Leadbetter's resonator guitar is, understandably central to the recording, but it doesn't dominate the arrangements. Bibey's mandolin, Hale's guitar and Burleson's banjo are as vital to the All-Stars of Bluegrass's sound, with Gulley's bass pulling together the rhythm. Stuart Duncan and Tim Crouch contribute fiddle.

"Swing For the Fences" reveals a propensity toward gratefulness and grace. With lead and harmony vocal mastery on display alongside instrumental prowess expected from top-flight bluegrass bands, a well-composed approach to modern bluegrass is presented across "Swing For the Fence's" 32 minutes.

CDs by Phil Leadbetter and The All Stars of Bluegrass