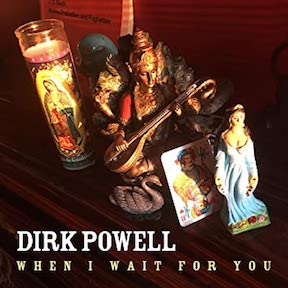 Multi-instrumentalist Dirk Powell's "When I Wait For You" reflects his reverence for old time music while infusing it with elements of modern folk and touches of bluegrass. The set kicks off with "Everything is Alright," which recalls acts such as Mumford and Sons and The Lumineers. The song essentially serves as the title track with the lyric "I'm up till the morning light/When I wait for you" featuring daughter Amelia Powell lending sweet harmonies to Powell's lead vocal recalling John Prine. "You Will Live Love" and "Let the Night Seize Me" have a similarly contemporary appeal.

A more traditional approach is taken with the ballads "Ain't Never Fell" and "The Silk Merchant's Daughter," the latter also given a Celtic touch with Michael McGoldrick's flute. The haunting "I Ain't Playing Pretty Polly" finds Powell accompanied only by his acoustic guitar and harmonies from Rhiannon Giddens as he swears off performing songs about victimized women ("I ain't playing Pretty Polly or Rosie McFall, I ain't playing Knoxville Girl, no none of them at all/No more tales of women killed by drunken, violent men/They don't deserve their stories told, I won't raise my voice again").

The influence of The Band appears to be strong on "The Bright Light of Day," while the French language tune "Les Yeux De Rosalie" has a Cajun feel and again features daughter Amelia. Powell's other daughter, Sophie, appears on a few tracks as well, most prominently on the uptempo "Olivia," with its ominous undertones in the lyrics ("The sun arrives with each bright morning/The songbirds cast their quiet spell/You hear their joy but not their warning"). Another highlight is "The Little Things" with Sara Watkins on fiddle and duet vocal.

Produced by Powell along with Donald Shaw (of Capercaillie and playing accordion, piano) the strong compositions and impressive guest list make "When I Wait For You" a fun, compelling listen.